Bringing Irish theatre to the masses in London 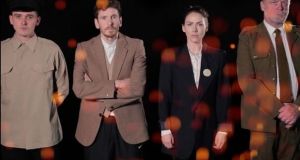 To Have To Shoot Irishmen by Lizzie Nunnery runs at the Omnibus Theatre in Clapham from October 2nd to 20th.

As the artistic director of an Off-West End theatre in South London, it’s been in my mind to programme an Irish season for the last five years. I’ve wanted to provide a space for Irish artists and for audiences to immerse themselves in Irish stories that stimulate a dialogue, but I’ve been waiting for the right play to come along to be the anchor.

So finally, next month, I’m thrilled to be launching our first Irish season at Omnibus Theatre with three plays: To Have to Shoot Irishmen, Quietly and Boundaries. It’s significant that each piece explores major shifts in Irish history, from the Easter Risings through to the Good Friday Agreement and up to present day exploring LGBTQ+ abuse.

Last year, when Lizzie Nunnery’s script To Have To Shoot Irishmen first came across my radar, it struck a deep chord, and I knew this would be the start of something bigger. Nunnery, an award-winning playwright, has written a stirring tale about the 1916 Easter Rising that unpicks the horror of organised violence, and explores the difficulty of finding truth in fractured perspectives. I was drawn to her narrative which provides a penetrating view on the first anti-colonial struggle of the modern era, written from a different perspective of the Sheehy Skeffington story, through a female lens.

I was also drawn to the fact that there was going to be music; Nunnery, who is also a talented songwriter and musician, weaved folk songs throughout the piece. I’m really thrilled to be holding the London premiere right here in our theatre before it goes on a national tour.

When Strange Fish, a relatively young Irish theatre company, came to me with an idea about a revival of dramatist Owen McCafferty’s Quietly, suddenly, the whole season started to take shape. This particularly timely staging of McCafferty’s play marks 20 years since the Good Friday Agreement. It’s a powerful story about truth and reconciliation, that creates a fascinating companion piece to To Have To Shoot Irishmen. Both plays bookend the conflicts.

Also, because Quietly is going to be a site responsive production set in a Belfast pub, the opportunity to create an authentic Irish space in our theatre bar was a very attractive idea to me.

The third play in our Irish season, Boundaries, is a piece of verbatim theatre, raw and unfiltered. The story uses real witness testimony to create a powerful first person account of harassment and sexual assault, against the backdrop of an ultra-conservative social landscape of a small town in Northern Ireland. It will be the first time this hard-hitting play will be shown as a full-length piece, co-written by Marina Hampton with Irish writer-director Don Mc Camphill.

My hope is by programming these three plays that audiences will use them as platforms for dialogue, and see the timeline running through from 1916 to Ireland today.

Word is spreading about our first Irish season among the large Irish community in London, and reactions have been both unexpected and overwhelmingly positive. Being London-Irish myself, I knew about the pockets of Irish communities around North London, Kilburn, Camden, Hackney and beyond, but I’ve recently discovered that Clapham in South London has a relatively new influx of young Irish professionals. Armed with this knowledge and the potential to engage new audiences, right on our doorstep, my plans are to programme an Irish season annually, each year exploring different themes.

The Irish voice is rich, powerful and captivating. Writers and theatre companies like Ailis Ni Riain and Malaprop Theatre are prime examples. Ni Riain’s work is beautifully poetic and multi-layered, and I hope to bring one of her pieces The Tallest Man in the World to London next year. Malaprop, are an ensemble whose contemporary method of storytelling is so current and engaging.

There’s such talent among these Irish artists who are presenting unmissable theatre that deserves to be seen by a wider audience here in London, and I’m looking forward to welcoming both established and emerging artists to our theatre. Exciting times are ahead.