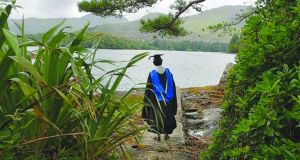 The graduate on the Beara Peninsula in Co Kerry

Martina Viscardi is originally from Dublin, but has lived on the Beara Peninsula in Co Kerry for more than 25 years. She currently lives near Zurich in Switzerland and works as an English teacher at an international school. Her son Conor graduated this autumn from UCD with a master’s in regional and urban planning. The graduation was a virtual one, with Conor, his twin sister, Tara, and dad, Claudio, watching from home in Co Kerry. Travel restrictions and work commitments meant Martina couldn’t come home or watch the ceremony, so she wrote a piece for her son, to tell him how she imagined the day had gone.

Round here it always had the quality of a film set, with its spectacular backdrops and colourful characters. Life on the Beara peninsula ebbs and flows as people come and go. They were only home for a short time, but it was humbling to see how the young people in my life had taken on all the changes that Covid-19 had brought.

The house was spick and span and my twin son and daughter had laid out carefully chosen outfits, as if they were going somewhere. The graduation robes had made the 380km journey from Dublin, make-up had been put on and hair styled. Youthful siblings, spirits buoyant, had hastily re-configured their world for these new circumstances.

The graduation ceremony would take place over Skype and everyone had been informed that the slot would be on Thursday at 2.30pm. All three, my husband, son and daughter, took their seats around the kitchen table punctually with one dressed in his graduation robes ready to log on. Appearing on the computer screen like clockwork, Andrew Deeks the president of UCD officiated. He was accompanied at the virtual ceremony by a core of robed academics. All the students - hundreds of them - would be conferred in absentia.

The UCD president began. The roll call in Latin sounded sombre, yet reassuringly official. My son’s name was called, a Master’s degree mentioned and in the blink of an eye, he was conferred. In this little time capsule, there was still space for some emotion: a lump in the throat, a heartfelt hug, many congratulations. Speaking from UCD’s great hall, the college officials were beamed with flawless efficiency and clarity into the modest, farmhouse kitchen, before they flickered away. A celebratory toast would wait until later; until I came back to the Beara.

The yew trees towering over the entrance to the house formed the perfect backdrop for the graduate photo op, standing sentinel on either side of Conor as he smiled

Outside, the sun had come out and I imagined the Kerry sky was nuanced, like a half-completed watercolour. Dappled clouds had withheld their rain and the air was warmer outdoors than the temperature inside had been. Today the lawn had a manicured look and the deer, who usually had the place to themselves, were probably in hiding nearby. Planted in twos, as many of this Beara garden’s trees and shrubs had been over the years to mark milestones in the twins’ lives, the 23 year-old pair of yews, towering over the entrance to the house provided the perfect backdrop for the graduate photo op, standing sentinel on either side of Conor as he smiled.

These first photographs would - should - have been on campus, with fellow graduates milling about, robes proudly worn and a pleasing, if distanced, mixing and mingling of families, happy to share the moment of goodwill with strangers. We had experienced this two years ago at undergraduate conferrings. Those days now seemed long gone. UCD’s campus is vast and on graduation day families queue politely to snap memories beside its little artificial lake or beneath the portals of its faculty buildings, each bearing the college crest. Hilarity is a time-honoured tradition.

Today, the moody Beara peninsula waited instead. Like costumed actors, eager to acquaint themselves with a film location, the three set off. But where to? Growing up here a map of many events had been laid out. Retracing where the twins had learned to walk, the nearby sub-tropical gardens beckoned. Entering the familiar tableau of New Zealand ferns and towering eucalyptus trees, the maze of intertwined rhododendron rose up. Little paths all led to the sea, where secluded coves facilitated contemplation, with rocks offering seats near the water. Curious onlookers, a colony of seals appeared to notice the cap and gown and perceived that something out of the ordinary was taking place in this cloistered spot. I could almost hear the sound of pebbles crunching underfoot, an altogether different sound to the echo of footfall in polished academic halls that there should have been. A soft spray of transient rain hurried along the taking of some more photos. I could picture it.

The little party moved on and visited the two-teacher national school dating from 1862 where youthful ambitions were first incubated, but were now fulfilled. Early evening drew in and a table booked for later at the local pub at the harbour beckoned. But first, all three took a trip back home, up the long, winding drive and past the pond, where the deer had resumed their territorial activity and were most likely grazing, unconcerned. That, at least, is how I imagined it all. It would have to do.

Skype had connected us across the expanse from Zurich to Kerry. As we raised a toast, there was no talk of lockdowns, rising global death tolls or the distance that separated us - just the four of us ‘together’ again.