Applications have doubled since Brexit. Are people doing it just for travel, or is there more to it? 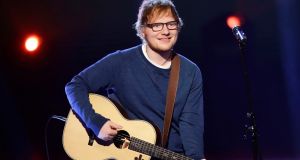 Will Ed Sheeran apply for an Irish passport after Brexit? Photograph: Antonio Calanni/AP

As I write this, my home city of Cork is consumed with the weekend’s Ed Sheeran concerts in Páirc Uí Chaoimh. For those of us of a certain age, it is reminiscent of the two nights in August 1996 when Oasis played the old stadium.

Another thing Ed Sheeran has in common with the Gallagher brothers is Irish descent. Famously, Sheeran’s grandmother is from Wexford and grandfather is from Belfast, whereas the Gallaghers have a father from Meath and a mother from Mayo. All would therefore be entitled, should they so wish, to Irish passports; an option their fellow second- and third-generation Irish compatriots have been availing of in increasing numbers in recent years.

The continuing demand for Irish passports among British citizens remains one of the more intriguing subplots of the Brexit vote. In 2016, applications from Great Britain (excluding Northern Ireland) were up 37 per cent, rising by a further 28 per cent in 2017.

Many appear to have come from people of Irish descent. Department of Foreign Affairs figures for 2017 show 37 per cent of passport applications in Britain came from Irish citizens with an Irish-born parent, while 7 per cent came following Foreign Birth registration: the process through which citizens of another country can claim eligibility to Irish citizenship. Applications through this process have risen dramatically in Britain - from just over 1,000 in 2015, to more than 13,000 in 2017.

In parallel, applications for citizenship through naturalisation from British citizens living in Ireland have increased from 50 in 2014 to 860 in 2017.

While these statistics represent numerous individual decisions regarding citizenship, belonging and (presumably) freedom of movement, they also represent a broader sociocultural phenomenon. British newspapers, including those who strongly backed a Leave vote like the Daily Express, have run advice articles on applying for citizenship of other EU countries, with a particular focus on Ireland.

It is not unusual for those who successfully apply for citizenship to post proof on social media, occasionally accompanied by a stated desire to learn more about their “new” country. Responses to this from long-term Irish citizens have ranged from the humorous (comedian Mary Bourke’s I Want An Irish Passport) to the informative (Naomi O’Leary and Tim McInerney’s podcast The Irish Passport).

As a social psychologist who researches identity issues among the Irish diaspora, this process has been fascinating (albeit tinged with regret for the circumstances that brought it about in the first place).

A particularly intriguing question has been whether the process of applying for Irish passports represents actual identity change among applicants, or simply the formalisation of an already held identity.

While the upsurge in passport applications has been represented as British people “becoming” Irish in order to maintain access to travel within the EU, the picture is likely to be more complex. We know from past social scientific research, including my own, that those of Irish descent in Britain often combine a profound and deeply-held sense of their Irish heritage with their British upbringing and everyday environment. People who had quite mixed identities to begin with could be starting to claim Irishness in certain strands of their lives where they hadn't before.

That these hybrid identities are not more widely recognised in Ireland could be due to the lack of a straightforward “British-Irish” label, along the lines of “Irish-American”. Many second and third generation Irish in Britain employ identities that combine their home cities with their Irish heritage, such as London-Irish, Birmingham-Irish, Manchester-Irish etc. However, these identities may not quite cover the forms of dual citizenship that are now emerging, incorporating the crucial European element.

Complicating the picture is that, until now, many people of Irish descent in Britain have drawn a distinction between “feeling” Irish (often quite strongly) and formally claiming Irishness in a legal or bureaucratic way. Estimates suggest that more than 5 million people in Britain have at least one Irish grandparent.

But census figures of the Irish in Britain are a fraction of this, both in relation to nationality and ethnicity, with just over 500,000 people in England identifying their ethnicity as “White: Irish”’ in the 2011 census. The lower than anticipated numbers choosing the “White: Irish” ethnicity option in both 2001 and 2011 came despite campaigns by Irish community groups urging those eligible to “tick the Irish box”.

Of course, not all those of Irish descent in Britain would necessarily identify as “White”, but this in itself cannot explain this shortfall.

Analysis led by Professor Mary Hickman suggested that one potential reason may have been confusion between ethnicity and nationality. Interviews with second-generation Irish people suggest past experience of having their identities viewed as “inauthentic”, both in Ireland and Britain, may have led to a reluctance to claim Irishness in this way.

Overall, strength of feeling of Irishness is not necessarily a strong predictor of self-describing as Irish on census forms. Those who did select the “White: Irish” box on the other hand, tended to be younger and more upwardly mobile.

Similar dynamics may be at play among those now applying for Irish passports. Analysis of the Brexit vote suggests that younger, more upwardly mobile people were more likely to vote “Remain” - we can perhaps extrapolate that it is this cohort that would be most concerned about taking steps to preserve their own freedom of movement, such as obtaining an Irish passport.

At this point, this is speculative. If there is one thing we can say for certain about Irish identity among those of Irish descent in Britain, it is that it is fluid, contingent and shaped by the broader cultural and socio-political environment. How those of Irish descent negotiate their identities in the aftermath of Brexit is a subject that demands further research; research I hope to carry out in the near future.

If you have applied for an Irish passport based on descent since the Brexit vote, or are thinking about doing so, I would like to hear from you. I am particularly interested in hearing from those currently based in London. Please contact me at marc.scully@mic.ul.ie

Dr Marc Scully is a lecturer in psychology at Mary Immaculate College in Limerick, with a special interest in migration and the Irish diaspora.