Leinster in tough test against Glasgow 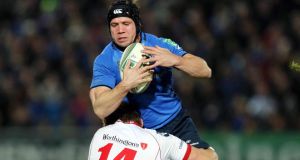 Isaac Boss steps in as scrumhalf for Leinster in the absence of the injured Eoin Reddan. Photograph: Inpho


Glasgow come to the RDS knowing that at this juncture in the competition it becomes a dog fight for points. Be sure that Joe Schmidt, Rob P enney and Mark Anscombe have a number of points in their mind that will ensure they make the playoffs.

Leinster are in third place and two points behind the leaders so tonight’s match will impact on whether they are sticking with the pace for their ambition of a home draw for the semifinals. In that light Schmidt will welcome back several players who were unavailable during the Six Nations.

The departing Isa Nacewa lines out at fullback in a back three which also features Munster bound Andrew Conway and Dave Kearney – who scored two tries last time out against the Dragons.

With Eoin Reddan sidelined for some time with a fractured leg Isaac Boss partners the league’s top points scorer and Leinster’s most recent Irish cap, Ian Madigan (127 points in 17 games to date) at outhalf, with the returning Gordon D’Arcy forming a midfield partnership with Eoin O’Malley.


First appearance
In the secondrow Quinn Roux makes his first senior appearance since the reverse fixture in November and he lines out with captain Leo Cullen. Shane Jennings, Kevin McLaughlin and Jordi Murphy form the backrow with a significant amount of interest focussing on Michael Bent, who comes for the resting Mike Ross at tighthead prop, Heinke van der Merwe in the loosehead side for Cian Healy.

Glasgow have their own problems with injury to key players and will arrive without Chris Cusiter, who is out until next season with a shoulder injury. The scrumhalf had been on course to figure in coach Gregor Townsend ’s plans for the trip but the 30-year-old suffered an adverse reaction to full-contact training. Townsend will also have to make the trip with Scotland ’s Sean Maitland (leg) and Stuart Hogg (knee).


On the bench
Other Scotland squad members, however, are coming to Dublin with a few of them starting on the bench. Rob Harley, Duncan Weir, Dougie Hall and skipper Ally Kellock are in the starting line-up, while Henry Pyrgos, Ruaridh Jackson and Ryan Wilson are included in the replacements.

Still, Leinster will cast their eye over the challenge and see it as considerable with quality lacing the side. Weir at outhalf, Canadian winger DTH van der Merwe on the flank, Hall and Moray Low in the frontrow, Kellock at lock and a backrow with John Barclay should provide enough abrasive abilty for Glasgow to feel they have plenty. Then there is that bench.

“We have been on a fantastic run of form lately, but Leinster will provide an extremely tough challenge for us and we’ll need to be at our best if we’re to come away with a positive result,” said Townsend.

“It’s been good to have our full squad back together again after the Six Nations and training has been very competitive and sharp this week. We travel to Dublin having put ourselves in a good position in the league, but nothing is won until May.”

Underplaying it a little maybe. Coming over to play against the European Champions in Dublin is a big deal for every Pro12 team and Glasgow know it well. At their peril they look at it as just another match.