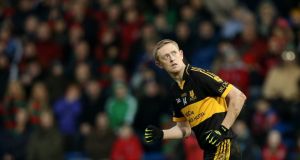 Colm Cooper in action for Dr Crokes, who will be seeking their fourth Kerry club title in a row when they take on Austin Stacks in Sunday’s county final. Photograph: James Crombie/Inpho

With the GAA providing it’s now customary “leak” of provisional football league fixtures, the focus is shifted further towards 2014, and particularly for Kerry and Dublin.

With their All-Ireland semi-final rematch in Croke Park the stand-out fixture in the opening round of games on the first weekend in February – now just over three months away – there won’t be much more time to lick the sweet success or indeed sour wounds of that latest epic duel.

Sunday’s Kerry county final – between old rivals Dr Crokes of Killarney and Austin Stacks of Tralee – affords several Kerry players the chance to move on from what happened on September 1st, and not least of all Colm “Gooch” Cooper.

As Cooper so eloquently put it, no player “masters” the disappointment of getting over a tough championship defeat like that, although getting back into the club championship certainly helps. His Dr Crokes team are chasing a fourth successive Kerry title on Sunday – Copper, it seems, still at least partly driven by the quest to win an All-Ireland with his club.

“I always find going back to the club a massive tonic,” he says. “I didn’t get much of a break after the championship, but there’ll be long enough time when you won’t be in finals, when you’re retired or whatever you want to call it. And for the first week or two after the Dublin game it was very disappointing, and you wonder how you’ll get over it. But like I say, when you get back into the club set-up, different priorities become the focus and you move on.”

Transition
What is certain is that with Tomás Ó Sé now setting off into retirement, Kerry will be stepping up the transition again for 2014, although Cooper doesn’t necessarily see it that way.

“I think we’ve been building anyway. Look at the players who came in this year – like Peter Crowley, Fionn Fitzgerald, Shane Enright. James O’Donoghue also had his first full season. So we have introduced four or five players and we are looking at those guys being maybe a little bit more mature next year.

“So I don’t think you can have a scenario that ‘let’s replace Tomás’. Because that’s not going to happen, and that’s heaping huge pressure on any young fella who thinks he can. So I think you should forget about that and just try to build your team - I wouldn’t be putting anyone into the status of trying to be the next Tomás Ó Sé because invariably that is not going to happen.”

Meanwhile, in a further example of the club versus country conflict that has marred the Irish participation in this year’s International Rules with Australia, it was confirmed that Cork’s Aidan Walsh and Ciarán Sheehan would both miss the second test in Croke Park on Saturday week due to club commitments.

Walsh’s club, Kanturk, will play Sheehan’s club Eire Óg in the Cork IHC final on Sunday week, and both clubs have indicated their preference for the game to go ahead as scheduled, given it’s the curtain-raiser to the senior final.

6 Could a Covid-19 smell test help bring coronavirus under control?

7 Blindboy Boatclub: ‘I had the choice of being a psychotherapist or be a mad bastard’

9 Six Nations 2021: Jack Carty among the faces that just don’t seem to fit

1 David McWilliams: Why the young are priced out of the Irish economy

2 Emma de Souza: My generation deserves to have its say on Irish unity now

3 Una Mullally: Government failing to lead us through pandemic