‘Wire’ creator David Simon: ‘Our systems are under siege’

TV writer on decline of journalism, rise of Trump and bringing the Pogues to the stage 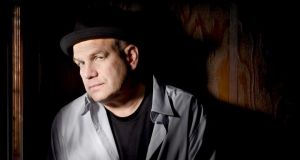 Television creator David Simon is in Ireland this weekend for a public discussion with Richard Ford and Fintan O’Toole about US president Donald Trump. “I only found that there was going to be a political dynamic [to the talk] when I read it somewhere online,” he says and laughs. “I am obviously willing to rant about politics. I’ve been doing it for a while.”

Simon has always been a politicised writer. He’s the show-runner behind several of the best American television series of recent years: The Wire, which explored every nook and cranny of a failing American city; Generation Kill, set during the invasion of Iraq; Treme, about the aftermath of the New Orleans flood; and Show Me a Hero, about a racially-tinged housing crisis in 1980s Yonkers.

His shows stray from the usual template of the golden age of drama, which focuses on larger-than-life Shakespearean antiheroes such as Tony Soprano or Walter White, in favour of depicting communities at the mercy of greater social forces. “It’s a different strain in the dramatic tradition,” he says, “the idea that universal forces are larger than individuals. There are a lot of people who don’t want to watch narratives that are framed in that way because they get enough of that in real life. But other people find it cathartic. . . I’m more interested in systems and structure and process than most writers writing drama.”

This might be because he was never drawn to screenwriting when he was younger. He wanted to be a journalist. “And not just a journalist, I wanted to be a ‘newspaper man’ which seems even more antiquated. My hometown paper was the Washington Post and at 13 or 14 I read the Bernstein and Woodward coverage of Watergate contemporaneously . . . I came up at that point when journalism’s presumptions were that we were going to get better and more sophisticated and more complicated and were going to be able to speak about anything that mattered to the human condition. Newspapers were going to become like magazines and magazines were going to become like goddamn books.”

What happened? A terrible confluence of chain ownership and dumbing down, he says. “I wanted to write about systems and process and the out-of-town editors who were already looking past the Baltimore Sun [where Simon worked] to higher in the newspaper chain; they wanted prizes and ‘impact’.”

What does he mean by impact? “Putting a pelt on the wall. If a complicated issue had two conflicting forces I would watch my newspaper abandon the coverage of one to highlight the other. They were writing towards simplicity and outrage in the hope of a simple villain and I think that became fundamental at many second-tier newspapers.”

The fifth season of The Wire addressed many of his frustrations with media. “[The Wire] critiqued law enforcement, politics, public education as it’s practised, and it was all well regarded by the average journalist until we turned the camera on them and said: ‘What? You think you’re doing your jobs?’ ”

He took a buy-out from the Baltimore Sun in 1995. His non-fiction book about policing, Homicide: A Year on the Killing Streets, had been adapted into a TV series for which he had written scripts and he began sublimating his journalistic instincts into drama. “The fracturing of the TV audience away from free networks and advertising, where you needed to have a 25 per cent share, left room to have a grown-up medium if you wanted.”

Many of his projects focused on the type of post-industrial class and race issues that have come to the fore in the era of Trump. “A lot of people have asked me would Frank Sobotka [a union leader in The Wire] have voted for Trump,” he says. “And I say, ‘No, we wrote him smarter than that.’ But would some of his membership? Yeah, some of them would.

I stood in a London pub last night & spend hundreds of pounds buying pints, apologizing for your venal ignorance. It was not at all enough. https://t.co/BlwkL5zcdL

“I don’t think it’s unfair to note that the Democratic Party took for granted and walked away from the trauma of the working class. . . They maintained the allegiance of the black and Latino working class because they didn’t walk away from civil rights or an honest immigration policy, but the white working class had less and less reason to feel allegiance.”

Simon often sounds more like a socialist activist than a television screenwriter. He laments “the triumph of capital over labour”. He defends globalisation but adds: “It would be nice if someone had given an honest assessment of what was going to happen to the manufacturing classes once manufacturing disappeared.”

Trump is not the solution to these problems, he says. “I’ve never seen a more astonishingly ill-equipped human being to lead a nation. I think our systems are under siege and I think our civil liberties are at considerable risk and I think basic facts are no longer the currency of our civic debate.”

Are the cutbacks in journalism coming home to roost? “Certainly,” he says, but later he adds: “Since the systems failure that was the election, you’d have to be blind not to credit the fact that some of our mainstream media have responded well. . . The same media that failed to stand apart from power before the Iraq war or to properly weigh the accusations being delivered during the election is doing a hell of a job now in some instances.”

He also feels a certain amount of personal urgency. He has arranged pro-immigration fundraising events, donated money and been active on Twitter. “I don’t want to look at my kids and say I wasn’t full-throated at this moment.”

He’s not afraid of an argument, he says, though he notes that “some people just need to be told to get f***ed . . . I’m a lefty Jew and I’m pretty unrepentant about who I am . . . and it brings out a lot of ugly on the internet. There’s a real subtext of racism and anti-Semitism in this country that didn’t go away with Obama. In fact, in some ways it was hyperbolised because of Obama and now it has been given free rein because of the indifference of this president to his rhetoric.”

Debating on Twitter helps him work out his own thinking, he says, but only when he’s arguing with people who are “genuine and can avoid the usual traps of bad rhetoric”. It’s also good for his writing, “because if you write straw men then the drama gets weaker”.

Sometimes his social media interventions are more light-hearted. Last year when John Banville suggested in this newspaper that writers couldn’t be good fathers, Simon tweeted the immortal words: “Speak for yourself, f***nuts. Family is family. The job is the job.”

He laughs. “Oh, that poor guy,” he says. “Listen, I didn’t mean to go after him. I don’t even know Banville. But that whole thing – come on! I cannot get up on a cross because I’m a f***ing writer and pretend that I had to go to Calvary in order to put words on the page. What the f***? I cannot muster half the self-regard required to believe that the cost of being a writer is you treat people poorly.”

He’s continuously busy. With his wife, the novelist Laura Lippman, his long-time collaborator George Pelecanos and Druid Theatre’s Garry Hynes, he’s creating a musical built around the music of the Pogues. His work is filled with music, but when he was initially approached to write it by the late Pogues guitarist Philip Chevron, Simon tried to dissuade him. “[The Pogues are] somewhere beyond the realm of ordinary music.”

What’s the common thread running through his work? “I would say that whether we do Generation Kill or housing bureaucrats or drug dealers or cops, our hearts are always with labour or middle management.” He laughs. “We’re always looking at where the money goes, where it comes from, who benefits, who doesn’t benefit and what happens to the people in the machine.”

What good does writing about these things do? “You’re talking about ‘impact’,” he says. “One thing I had contempt for in journalism was, ‘We’ll write it this way and then we’ll get a new law passed [or they’ll] hang this guy’s pelt on the wall’, and in trying to do that they would often shave the story to make it a perfect little arrow of outrage . . . That’s just dishonest . . . So even when I was a reporter I threw out the idea of ‘impact’.”

So what’s the goal? “My goal is to tell the truth and not cheat, so that later on whether they fixed the problem or they didn’t, they can’t say they didn’t know.”

David Simon, Richard Ford and Fintan O’Toole discuss “Potus 45” at the Step House Hotel at 5pm on Saturday as part of the Borris Festival of Writing and Ideas