Why do you feel compelled to flee boredom? 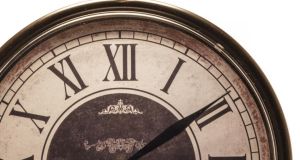 Have we had the time of our lives?

For the average worker, summer is a time of freedom. But one wonders precisely what sort of liberty is expressed by going somewhere, seeing the sights and then going home.

As creatures of habit, we tend to use the break to embrace another form of routine. We tend to the garden, have barbecues, and – for the self-improving among us – go to summer schools.

There are conventional ways of spending summer but there is also scope to ask deep questions about the nature and purpose of our existence.

Dr Felix Ó Murchadha, senior lecturer in philosophy at NUI Galway and author of The Time of Revolution: Kairos and Chronos in Heidegger, has a particular interest in exploring “ruptures in time” in both history and everyday life. He provides today’s idea: We shouldn’t run away from boredom but tackle the fundamental questions it raises.

We tend to speak about time as a ‘resource’ that’s used up over the course of our lives. Is that a mistaken view?

Felix Ó Murchadha: “Time has many aspects. We can distinguish between the inner time of consciousness, collective time of a community and astronomical time of days, seasons and years.

“To speak of time in any of these aspects as a resource to be used up seems problematic. Yet, it is instructive to look at the word ‘resource’ itself, which comes from the French resourse, meaning source in the sense of a spring, hence life-giving. Time has this life-giving aspect.

“Conception and birth are not simply events in time, but events of time. Yet, time is also death-giving. We are mortal beings and every living moment is marked with the sign of our final demise, when we do not so much run out of time as time runs out on us: in dying we leave a world, a humanity and an Earth that continues to go on, just as we are born into a time that preceded us.”

Is it wrong to ‘waste’ time, or use it unproductively?

“I would question the very concept of ‘use’ here. To use something is to employ it for an end, to bring something about. Time is the condition for such activity, not the means. Nevertheless, increasingly in our society we think of time as a condition of certain measurable, tangible outputs.

“The mechanised rhythm of production subjects us to a time which is not ours; we waste time to the extent to which we fail to live up to that rhythm. Today such ‘mechanised time’ tends increasingly to permeate all our lives, in particular our work lives.”

What does boredom tell us about ourselves? Should we always run away from it?

“The German word for boredom is Langeweile, literally meaning a long duration. Time drags on; there seems no end to the moment in which we find ourselves. For the 17th-century philosopher Blaise Pascal, we are constantly trying to avoid such deep boredom by distracting ourselves with endless entertainments. I would suggest that what we are attempting to escape is primarily the power of time. Boredom manifests a failure to transform; time goes on, we feel it to go on, but the future holds no promise and the past has no meaning.

“In other words, the power of time is apparent here in the withholding of that which is to come and the collapsing into indifference of all that has been. It is not something to avoid through endless distractions, but rather raises for us fundamental questions as to the meaning or otherwise of mortal existence.”

We tend to use leisure time for consumption or activities promoted by the market economy. Are holidays, in this sense, a fraud?

“Cross-culturally, time tends to be divided into two, roughly matching on to a distinction between profane and sacred time. The word ‘holiday’ suggests this: the Old English haligdæg meaning ‘holy day’.

“The difference between sacred and profane time can reflect the agrarian rhythm of sowing and harvesting, of growth and decay. While the agrarian rhythm is tied to nature, in more urbanised societies, public holidays also play a role in commemorating those historical events that hold a community together, for example, Independence Day in the US.

“Such breaks in profane, work time, refresh us and reaffirm the underlying temporal cycle. In our consumer society, much of the economy is invested in supplying the consumables for holidays. Echoing Pascal, I would suggest that the market economy is invested in producing means of distraction, enabling us to flee boredom.”

By creating ‘always-on’ syndrome, is technology changing the nature of time?

“Time is a fundamental way in which things are for us, and as the manner of our relation to reality is modified through historical change, so too our temporal experience is transformed. But this is a gradual change. Until the advent of the mechanical clock in the 13th century, time was measured imprecisely and unevenly, generally by reference to the sun.

“The possibility of uniform measurement of time indifferent to daylight, seasons and location, indifferent also to the qualities of times and moments, has gradually come to order our lives in a manner previously unthinkable. To return to the question of resource: if time is reduced to such an indifferent measure, we lose our own time as mortal beings to the metronome of constant availability and become ourselves merely a resource to be used up.”

Question: Do you actually learn anything at summer schools?

Robert Frost replies: “Education is the ability to listen to almost anything without losing your temper or your self-confidence.”