When the applause is online, how can we judge the performance?

In the midst of a vast social, political and cultural experiment, we need all the data we can get 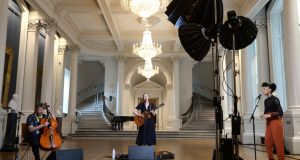 Lisa Hannigan and Loah performing with Kevin Murphy, left, in the Shaw Room at the National Gallery of Ireland as part of the Other Voices Courage series. Photograph: Dara Mac Dónaill

In 1995 a computer programmer named Craig Newmark set up a free and simple bulletin board where people could post ads for apartment rentals, second-hand furniture or whatever else they wanted to sell or buy. Within a decade, as a direct consequence, the classified advertising business which had sustained thousands of newspapers across the world for more than a century was on the brink of extinction.

Similar stories followed. Napster and its surrogates ripped up the music business; YouTube and Netflix upended television. Google and Facebook broke the link between content creation and advertising revenue. The world changed – fast – and we continue to grapple with the consequences.

Then, at some yet-to-be-established moment in 2019, a novel coronavirus jumped species to its first human host. Six months later, the world’s live cultural venues had shut down indefinitely.

The reaction of many practitioners in the performing arts has been impressive. We’ve seen a flood of rapidly improvised online solutions to the gap left by the great shutdown. Live concerts, one-person shows, archive recordings made free to the public, virtualised art galleries, livestreamed literary festivals and many other innovative projects have been launched and viewed by millions.

Superficially this looks like another digital revolution. But Covid-19 is not a disruptor like Craigslist and all the rest of them. The changes it has wrought are not permanent. The pandemic will pass. But, as restrictions continue to ease over the coming months, it might be worth thinking about the lessons artists, live venues and cultural institutions might usefully take on board from the past 20 years as they try to figure out the path ahead.

How much effort and resources should they put into original online content, for example? What is the definition of digital success? What should the balance be between pushing fresh content online and preparing for a return to performing in front of an actual live audience?

There are pitfalls to be avoided. Those in the media who’ve wrestled for years with metrics such as audience reach, engagement and average revenue per user may observe the current cultural experiments with a mix of admiration and scepticism.

Raw numbers can be very deceptive. There was a fashion at one stage among newspaper companies to declare with pride that their new online audiences were massive in comparison with their traditional print circulation. This ignored two salient realities: those audiences weren’t making the companies any money, and they had little or no loyalty to the title they were reading.

An admirable project such as the Abbey Theatre’s Dear Ireland, which is available in multiple parts on YouTube, has recorded an average of about 40,000 views per segment. So how do we measure the value of those 40,000 plays (plus the audience for the original livestream)?

That’s an awful lot more people than the theatre could have accommodated on its Abbey Street premises over the past three months. However, that’s clearly not a valid comparison (to be fair, it’s not one I’ve seen the Abbey make). So should the theatre take on another, similar project before the end of the year?

One of the challenges for anyone producing digital content is that the internet is essentially infinite. There is no constraint on the amount of material you can put online, and there’s no such thing as a full house. The corollary of that is that there is far too much stuff available so audiences become overwhelmed or indifferent and work is undervalued. That means a different set of editorial and creative value judgments have to be made when deciding what to do or not to do.

Many arts festivals this year, for example, are mounting online performances of one sort or another, supposedly in lieu of the cancelled physical event. Some of these digital presentations are simply there to remind us that the festival in question continues to exist and will return next year; others are more substantial and more ambitious.

There have also been a number of standalone strands of programming made in direct response to the current situation, such as the Courage series of concerts being staged by Other Voices with the support of the Department of Culture.

It would be interesting to see metrics on all of these, not in order to be critical but to have a meaningful conversation about what can be learned for the future. We are, after all, in the midst of a vast social, political and cultural experiment with highly uncertain outcomes. We need all the data we can get.