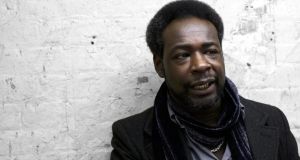 Formed almost two years ago by members of a few bands you may have heard of (The Things, Humanzi, Cheap Freaks), Dublin’s Exploding Eyes deliver the kind of urgent psych-rock you’ve wanted to hear since you last listened to Spooky Tooth and early song-era Brian Eno.

With two sets of siblings among this eight-piece band (including TG4 Young Traditional Piper of the Year Maitiú Ó Casaide and his sister Natalie on piano), The Bonny Men have been racking up the road miles while earning their stripes on the live front. Tonight sees them launch their second CD, Moyne Road, in the intimate setting of the Unitarian church on St Stephen’s Green. Merely a warm-up for their performance in The Dock in Carrick-on-Shannon, Co Leitrim on Wednesday, perhaps?

Manchester native and 808 State co-founder Gerald Simpson (left) has been a seminal figure in dance music since Voodoo Ray came along in 1988. However, Simpson hasn’t exclusively relied on the rave nostalgia circuit like many of his peers from back in the day. If you’re after forward-thinking electronic music, check out his post-acid albums like Black Secret Technology, To All The Things What They Need , Proto Acid and Tronic Jazz, where blazing sounds are to the fore.

The Canadian producer and DJ has long exhibited magpie tendencies. Here’s someone perfectly happy to dabble in many different sounds and genres. Initially lauded for colourful remixes of the buzzy pop hits of the moment, Hemsworth has finessed his skills, and last year’s debut album, Alone for the First Time, saw him flex his creative muscles with a serious gallery of collaborators. Support on the night comes from Rejjie Snow.

Paul Woolford’s releases for labels like Planet E, 20/20 Vision, Pokerflat, Hotflush, Phonica and his own Intimacy imprint have always exhibited much width and depth. The fantastic Special Request album, a record inspired by the pirate radio stations blasting out jungle, hardcore and rave when Woolford was a kid, showed he could also show off a much different sound when the occasion called for it. Here’s a DJ with considerable smarts.

Set among the elderly residents of a nursing home, Gavin Quinn’s production of MSND for the Abbey has an arresting, jangling conceit. Some will find it hard to see beyond the fingerprints of Quinn’s experimental company Pan Pan, but the Abbey asserts itself through slavish textual adherence and lavish resources. The course doesn’t always run smooth – Quinn is not a traditional actor’s director – but for anyone looking for an adventurous, ambitious staging, it could be true love.