What’s on around Ireland this weekend? 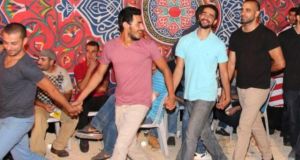 The wait has been excruciating, but Martin O’Neill’s Republic of Ireland team will finally return to the Aviva Stadium for a first competitive fixture in almost six months when they take on Poland on Sunday.

The crunch Euro 2016 qualifier has garnered particular interest among Ireland’s sizeable Polish ex-pat community, and with a place at next year’s championships still firmly up for grabs there’s sure to be plenty of rivalry between the ‘new Irish’ and their Boy in Green-supporting counterparts this weekend.

If you’re looking for something slightly out of the ordinary this weekend, intrepid treasure hunters are encouraged to visit the wee county in search of some wee people (and the obligatory crock’o’gold, of course).

According to local lore, Slieve Foy in Carlingford, Co Louth remains the spiritual home of leprechaunary on this isle, and was even given the honorary status of an EU special area of protection for flora, fauna and “little people” in recognition of its unique boast.

This year’s hunt takes place on the slops of Slieve Foy on Sunday, March 29th, where participants will be tasked with locating 100 ceramic leprechauns, each of which comes with a prize.

Award-winning novelist and Irish Times writer Michael Harding pays a visit to the Pavilion Theatre in Dún Laoghaire on Friday evening where he will regale the audience with readings and musings from his latest book Hanging with the Elephant. The Cavan man brings his live show to Draíocht in Blanchardstown the following evening.

A test of skill, endurance and navigation, Saturday’s Comeragh Bogtrot provides ample opportunity for avid adventure sports enthusiasts to blow off the cobwebs ahead of race season.

Participants will be given the choice of three routes of 32km, 21km and 17km over challenging mountainous terrain. For those less enticed by the competitive element and who simply want to enjoy the views and experience, the 17km route is walker-friendly and will be guided by members of the local hill-walking club.

A festival of food, poetry and theatre in one of Ireland’s most picturesque areas, the Doolin Writers’ Weekend offers a chance to indulge in Co Clare’s finest literary offerings in the shadows of the Cliffs of Moher.

Short story and poetry competitions will carry prizes of €1,000 each, and revellers will also be offered the chance to chat with published authors in a town which has played host to revered writers such as JM Synge, George Bernard Shaw and Dylan Thomas through the years.

Now in its fourth year, this weekend’s festival explores the theme of ‘Bodies in Conflict’, and features lectures, workshops and dance tutorials on the topic.

The highlight comes on Sunday afternoon when members of Palestine’s El Funoun Dance Troupe will lead an open-air instruction on the Middle-Eastern dance technique of ‘Dabke’ in Eyre Square. Various other events take place at NUI Galway and the Black Box Theatre from Friday to Sunday.