Unthinkable: Is mystical thinking a cop-out? 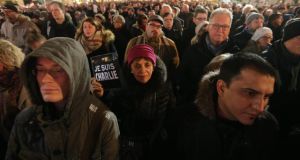 How would Merton have responded to radical Islam? Above, a protest against the attack on Charlie Hebdo

Prayer or contemplation can seem like a very weak response to today’s social ills. In the wake of the Islamist terrorist attack on France, there’s an instinctive wish to “hit back” or to “do something”.

Describing Thomas Merton – a Trappist monk born 100 years ago on January 31st – as countercultural, then, would be putting it mildly. The French-born mystic and pacifist rose to prominence in the US in the 1950s as an advocate of inter-faith dialogue, non-violence and simple living. “When ambition ends, happiness begins,” he was fond of saying.

But monasticism shouldn’t be confused with inactivity, says Rev Scott Peddie, a Presbyterian minister based in Ballyclare, Co Antrim, who facilitates inter-faith gatherings in Ireland under the Merton Fellowship for Peace and Contemplative Living.

Peddie, a former research biologist, says that “Merton’s understanding of society came from his insights gained through contemplative prayer, Lectio Divina [scriptural reading] and long periods of time spent in silent reflection”, but this vocation was “heavily intertwined” with his activism, including his stance against the Vietnam war and his environmentalism.

Mysticism can conjure up a type of woolly, impractical thinking. How would Merton have responded to such criticism?

Rev Scott Peddie: “In his lectures to the novices at Gethsemani Abbey, he spoke at length about the false dichotomy between “the world” and the “monastic life”. For him, the foundation of reality, that of God, was to be best understood, and crucially encountered, through a life of contemplation.

“That this life is to be located exclusively in a monastery was rejected by Merton. Rather it was something accessible to all Christians; one could claim that he was a leading proponent for the emancipation of mysticism from the few to the many.”

“Towards the end of his life, Merton certainly addressed these questions, especially in Apologies to an Unbeliever and The Unbelief of Believers. In these writings he was apologetic for the clumsiness and simplicity with which Christian ideas were often articulated, calling for the use of more contemporary language as the basis for an intelligent and open dialogue with atheism.

“That dialogue was beginning to open up just before Merton died [in 1968]. He did, for example, correspond with the German psychoanalyst and humanistic philosopher Eric Fromm. Had he lived, it would seem certain that this dialogue would have blossomed, setting the scene for a wider, more inclusive debate with key thinkers.”

Are there some people with whom you can not dialogue, for example Islamist terrorists?

How would Merton have responded to radical Islam? “This is a difficult question. Merton was very skilled at finding common ground between his own worldview and those with whom he entered dialogue

; that he had a deep and abiding interest in Islam is well-known. He would have been appalled by the warped fundamentalist ideology. He abhorred violence, but understood it is only through dialogue that ideas and perspectives can be robustly challenged and minds transformed.

“As such, I am persuaded that Merton would likely not rule out dialogue with such people; the bigger picture, the potential prize, however remote a possibility, of a change of heart and a renunciation of violence, would have motivated him.

“There may be a clue to the Trappist response to fundamentalism in an event that took place in 1996. During the Algerian civil war, seven Trappist monks from the monastery Notre-Dame de l’Atlas of Tibhirine in Algeria were kidnapped by the Armed Islamic Group and held for two months before being killed. The monks’ story reached a wide audience with the release of the film Of Gods and Men. In this example, there was dialogue, negotiation and openness, even though the outcome was not a positive one.”

What is your favourite comment, or idea, from Merton?

“For me, the most pertinent ideas, or quotes, are those that are practically oriented, where Merton calls on us to reflect on modern-day living and to consider how contemplation, silence and meaning can be realised in our daily lives. The three most important are:

“Walking down a street, sweeping a floor, washing dishes, hoeing beans, reading a book, taking a stroll in the woods – all can be enriched with contemplation and with the obscure sense of the presence of God.”– The Inner Experience: Notes on Contemplation.

“The greatest need of our time is to clean out the enormous mass of mental and emotional rubbish that clutters our minds and makes of all political and social life a mass illness. Without this housecleaning we cannot begin to see. Unless we see, we cannot think.” – Conjectures of a Guilty Bystander.

“For language to have meaning, there must be intervals of silence somewhere, to divide word from word and utterance from utterance. He who retires into silence does not necessarily hate language. Perhaps it is love and respect for language which imposes silence upon him. For the mercy of God is not heard in words unless it is heard, both before and after the words are spoken, in silence. – Philosophy of Silence.