Unthinkable: Is it ethical to eat plants?

Plants are ‘intelligent’, says philosopher Michael Marder, which is why we need to eat them with respect 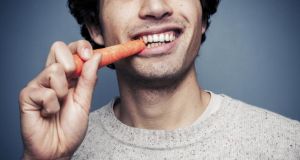 Before you bite into that carrot, think twice: you may be consuming its soul

It’s hard to live ethically these days. Everything we do seems to damage the environment or harm some other creature – so much so that it appears the only way to live with a clear conscience is to return to the wild and live off nuts and berries. Ah, but even that could be problematic.

Philosopher Michael Marder, a research professor at the University of the Basque Country, has called for “more respectful treatment of the flora” through his books Plant-Thinking and the forthcoming The Philosopher’s Plant. (michaelmarder.org)

His claim that a plant is an “intelligent, social, complex being” has been contested by biologists, but a stronger reaction has come from animal-rights activists who fear their cause is undermined by extending a duty of respect to plants.

Marder, however, is no killjoy, and he doesn’t want to make salad a crime. Rather, he argues, “the ethics of individual responsibility is highly over-rated in our societies, where respectful diets form small and extremely expensive pockets of resistance to the prevailing agricultural atrocities.”

Arguing that our priority should be tackling modern sources of production, he provides today’s idea: “There will be no justice or respect towards either plants or animals until agriculture and the economy as a whole are reorganised along non-capitalist lines.”

In what way are plants intelligent?

“I want to liberate the idea of intelligence from its strict connection to the brain, central nervous system or even animal sentience. I think that plants allow us to do just that. That is, they allow us to reconsider what we mean by intelligence – in the absence of recognisable anatomical or physiological structures we tend to associate with the term – and to imagine, more broadly, something like ‘the intelligence of life’.”

Is it okay to eat plants if you do so respectfully?

“With regard to eating plants, it is helpful to know that we can nourish ourselves on some of their parts, such as fruits, without killing the entire organism. In non-western cultures, this was actually an important criterion for an acceptable diet: Jainism, for example, prohibits the consumption of root vegetables, such as carrots or beets, since those parts are believed to house the souls of plants. Westerners can certainly learn a lot about respectful eating from these sources.

“Having said that, I think that we put too much emphasis on personal choices in dietary and similar daily practices, while overlooking the fateful decisions on the part of transnational corporations that largely determine what we eat. The corporate commodification of agriculture is particularly disrespectful, in that it sacrifices, among other things, the potentialities of plants and their genetic integrity for the sake of higher profits.”

How does your logic extend to meat-eating? Is it the disrespecting of animals, rather than their sentience, that makes it wrong to eat meat?

“Imagine that an animal is killed after having been artificially anaestheti sed, that is, not experiencing any pain whatsoever. Does such a way of killing it make meat-eating acceptable, having effectively dealt with the problem of sentience?

“You see, that is why sentience as a criterion is insufficient, and the notion of respect is inevitable in any postulation of an ethical diet.”

It is okay to bulldoze a forest to make way for a children’s hospital?

“I am sure that there is plenty of space outside a forest for a children’s hospital and that such medical facilities are more needed in populated areas. Many of our so-called moral choices are false, not in the sense that we select a wrong option out of the two, but in the sense that they are formulated in terms that are misguided.

“Plants or animals, a forest or a hospital, and so forth, are deceptive either/or choices. Which is why we need a more robust ethics than the one where we engage in complex calculations without reflecting about the pre-given parameters for decision-making.”

What can humans learn from plants?

“I have devoted many pages of my books and articles to the idea of learning from plants. If I were to sum up the most vital lesson plants have to teach us in one line, however, it would be: to grow not against but together with the environment, including other human beings, animals, and plants.”

What’s the most ethical dish one can eat?

“Eating is not a very ethical activity in and of itself, because, in the process, the eater destroys the independence of whatever is eaten and literally incorporates it into her- or himself. The closest we come to eating ethically is by nourishing ourselves on locally grown fruit or vegetables.

“As I suggested elsewhere, though, a more significant question is how one eats, rather than what. Does one acknowledge and show respect towards other potentialities of one’s sources of nutrition, resisting the temptation to convert them entirely into food? Does one let a being that provides one with sustenance live? Does one give thanks for this gift of nourishment?”

Question: My friends are ahead of me in everything; does that make me a failure?

Ralph Waldo Emerson replies: “Adopt the pace of nature: her secret is patience.”