Unthinkable: Is Christmas a cause for celebration? 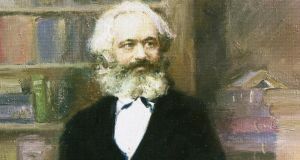 What does the festive season mean to followers of Karl Marx? Image: Imagno/Getty Images

An anthropologist studying the celebration of Christmas in Ireland would be forgiven for thinking it is principally a festival of consumption. According to a survey by accountants Deloitte, the average household will spend €894 in preparation for the day itself. As for St Stephen’s Day, it has become one of the major events of the retail calendar.

What exactly is the point of Christmas in an age when even the Christians are obsessed with shopping? Unthinkable explores this question with Helena Sheehan, professor emeritus at DCU and a former lecturer in the history of ideas. She is also an activist, a Marxist and an atheist – so not an impartial commentator on the meaning of Yule.

HAVE A MATERIALIST CHRISTMAS BUT NOT A CONSUMERIST ONE.

How would you describe yourself?
“If I only have a few seconds, I’d say, yes, I’m a Marxist, but if I had a bit longer I’d say it’s a bit more complicated than that, because I’ve evolved my own world view. I don’t like naming it after a man who lived in the 19th century.”

Is celebrating Christmas compatible with that?
“A Marxist sees the material basis of Christmas in a winter festival: a feast of light and warmth and celebration at the time of year that is darkest and coldest and bleakest. I’m an atheist, so I don’t mark it in a religious way.

You think it’s important for people to distinguish between materialism and consumerism. Why?
“Since I was a child, I’ve heard people say Christmas had become too materialistic. I think people are using the word materialism when they mean consumerism.

“Materialism is the idea that matter is the basis for all that exists. There’s the ancient philosophical debate between materialism and idealism, whether matter or ‘idea’ is the source of all that exists. Typically, idealism projects a supreme consciousness, a God, who created everything, whereas a materialist argues that everything which exists, even higher forms of consciousness, comes from the evolution of matter into higher and higher forms.

“I am a materialist, but not necessarily a consumerist. I am a consumer, of course, but that’s not the same thing.”

What’s wrong with consumerism?
“As our social division of labour has become more and more complex, consumption has become more disconnected from production. Under capitalism this has become more extreme and it’s possible for people to consume lavishly while producing nothing, or nothing of value. Children have more computing power to play games than doctors have to run medical centres in some parts of the world.”

Are the most valuable things those which money can’t buy?
“There is a role for money, as it allows for complex exchange of certain goods and services in a sophisticated society. There are spheres where it doesn’t belong and I think our culture has lost a sense of where to draw the line. The pursuit of knowledge, for example, should be beyond the circuitry of commodification. Our universities are going in the opposite direction.

“The main activity where I live by other values is in my left-wing activism. I have been politically active since the 1960s and it’s utterly uncommodified. It takes a lot of my life and that of others. Why are we doing it? There is no monetary or career reward. It’s an act of collective solidarity. The quality of relationships and the forms of the activity are completely different than exist in commercial activities.”

Is shopping a political act?
“Well, we all shop. We buy for need and for pleasure. I like decent food. I like my iPhone. There is nothing wrong with consuming, if you’ve earned your right to do it.

“I don’t think people just deciding not to consume, or to consume less, will solve the problem of consumerism and global capitalism. I think the main thing to do is to articulate the nature of the system, and try to convince people to engage in a process of undermining that system and evolving towards another system.”

How does an atheist Marxist celebrate Christmas?
“Aside from not going to mass, it’s much the same as the way other people do so. Cooking a turkey, exchanging presents, eating and drinking and laughing, reflecting on where it all comes from, and what’s to be done in the coming year.”

Salman Rusdhie: “What kind of Christmas present would Jesus ask Santa for?” (from the novel Fury)

Ronan O’Donnabhain (@rodonnabhain3h) replies: “To get my holiday back.”