Unthinkable: How much loving are you ethically obliged to do? 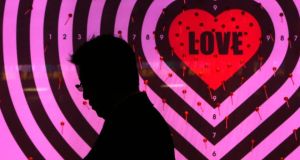 Love is a word much bandied about, and not just on St Valentine’s Day. But what is love, and can it be explained without resorting to cliche or sentimentality?

For this knotty problem Unthinkable has sought the assistance of William Lyons, professor emeritus of philosophy at Trinity College Dublin, whose work includes Emotion (Cambridge, 1980) and Socrates and His Clouds (Oberon Modern Plays, 2013), a “theatre of thought” play that premiered in London last summer. By correspondence, he provides today’s rather unsentimental idea:

There is no moral compulsion to love.


What do the ancient philosophers tell us about love?
William Lyons: “Plato, one of the founding fathers of philosophy in the West, was in general very suspicious of the emotions. Plato put forward a dualist or
quasi-dualist account of human nature which depicted a human being as a soul inhabiting a body.

“The body was the soul’s local runabout during the lifetime of the human person. Somewhat surprisingly, Plato located the emotions wholly in the ethereal soul and not even partly in the body, as one might expect. Thus, for Plato, the battle between reason and emotion, as to who would be master and who slave, was constantly being fought out in the immaterial arena of the human soul (in Greek, psyche ).

“Like Mao Zedong many centuries later, and like him with political overtones, Plato believed that certain sorts of music and drama were very dangerous and corrupting because they aroused the emotions, which could then all too easily overcome our reason and make us act irrationally. Arousing passionate love (eros) was always high on the list of possible offences.

“Aristotle took a very different view of the emotions. He was not a dualist. For him there was no ghostly soul lurking inside the body. There was only nonliving and living matter.

“Psychology, the study of psyche , was the study of the higher functions of the human animal, in particular of the cognitive (knowing and believing) and appetitive (wanting, desiring and willing) and affective (emotional) functions. Emotions for Aristotle were a much more rational enterprise. They were explained by Aristotle as a combination of the first two of these higher functions (cognitive and appetitive), plus the reactions to them in our lower, purely sensual life.

“Thus anger, Aristotle explained, is a commotion in our innards (the bodily bit) plus a desire for revenge (the appetitive bit) caused by registering some insult real or imagined (the cognitive bit). Likewise love is a commotion that generates a desire to cherish the object of love caused by seeing that person as (let’s for the moment leave it as) lovable.”


Should love be a guiding principle in life?
“For a certain generation, the Beatles song All You Need Is Love carried the message that, if embraced, love would heal all the ills of the world. Of course being in love (an emotion) does bring two people together. But, in a sense, that also reveals its limitations.

“Lovers are notoriously locked together in mutual attraction and unmindful of others. The two lovers walking arm in arm along the footpath are the ones most likely to force you into the gutter in your attempt to make your way along the same footpath in the opposite direction.

“More pertinently, emotions are not something we can adopt at will. Rather they are things, like storms, that come upon us unbidden and so by and large are outside of our control. Hence no emotion could be something that we could be urged to practise for moral reasons.”


Is it really advisable to

love your neighbour as yourself?
“What is being referred to in the maxim ‘

Love your neighbour as yourself’ is not the emotion love but caritas , the Christian virtue of charity. Charity is the willing adoption of an attitude of being ready to help those in need, no matter how one feels emotionally about them (and in the way we hope others would respond to us).

“In being charitable the Good Samaritan did not have to love (emotionally) the man – let us call him Matthias – whom he found beaten, robbed and lying half-dead in the street. For Matthias might have been quite unlovable in the emotional sense. He might have been well known in the neighbourhood as a ne’er-do-well who spent most of his time in the betting shop or pub, neglected his wife and children, was foul-mouthed and stank to high heaven.

“However, while charity is certainly a good attitude to have towards our fellow humans, it is not the only one. We need also, for example, to treat others justly, tolerantly and with honesty.”


It is often said that love is blind. Blind to what, exactly?
“In one sense all the emotions are a way of seeing one’s situation, past, present or future. For example, I might be angry because I see my oldest friend Mary’s failure to come to my birthday party as a deliberate insult. Likewise I might be afraid because I see as dangerous the fact that a large man is running down the dark lane towards me.

“Our emotional life – the way we see the world evaluatively – is usually open to rational and evidence-based critique. I now have to admit that I was wrong to be angry with Mary (as it turned out that she had experienced a heart attack) and that I was wrong to be afraid of the man in the lane. (It turned out he was just trying to return the mobile phone which I’d left in the pub.)

“Love, on the other hand, seems to be quite different. Seán, the barman at the Purple Heifer, may appear to everyone else to be sour, rude and charmless. But to Betty, his fiancee, he is refreshingly unconventional, delightfully frank and warmly endearing. Love often turns a blind eye to the facts or sees them through rose-tinted spectacles. As the 17th-century French philosopher Blaise Pascal put it in his Pensée s, ‘The heart has reasons that reason knows not of.’ ”

Question: “How do I know if I’m ready to commit?”


Henri Poincaré replies: “Experiment is the sole source of truth.”