Unthinkable: Does reality depend on where you are standing? 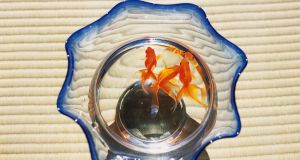 “What the hell is water?” Photograph: Thinkstock

Imagine, instead of being situated in the Louvre, the Mona Lisa was hanging on your bathroom wall. Would you have a different appreciation of it?

What if it stared down on you every time you sat on the toilet?

Or what if it was put on show on a sandwich board worn by a museum employee and paraded through town? Would you value the painting less if you could inspect it only while walking in tandem?

Such thought experiments are grist to the mill of phenomenologists – august folk who probe the relationship between bodily experience and knowledge.

Phenomenology was founded by the German mathematician and philosopher Edmund Husserl (1859-1938), in part as a response to objectivist thinking within science that presumed facts to be “out there” independent of subjective experience, taste and culture. As philosopher and art theorist Francis Halsall explains, phenomenology purports to be a “science of consciousness”. It views knowledge as intersubjective: neither subjective nor objective but born from collective human experience.

Halsall, who teaches at the National College of Art and Design, is helping to organise a cross-disciplinary conference in Dublin this week with the UCD school of philosophy calledQuestioning Aesthetics. To mark the event, he explains here why phenomenology is of enduring interest to artists and what use it is to any of us.

The answer to both questions could be summarised by Merleau-Ponty’s phrase “True philosophy consists of relearning to look at the world.”

“It considers itself as an attempt to start philosophy again, to go back to first principles. In straightforward terms, it is a philosophy of experience, so before you reach a conclusion, you reflect on sight, touch, movement.

“David Foster Wallace tells an anecdote of two fish swimming through the water, and then an older fish swims past and says, ‘Morning boys, how’s the water?’ and then one fish looks at the other and says, ‘What the hell is water?’ In some respects that captures what the phenomenologist is trying to do. They are trying to find the water. They are trying to think about the conditions that surround us.”

Is that because we don’t pay attention? We take our surroundings for granted.

“We do. Our environment is framed by history and culture; it is not an objective environment. It is shaped by our expectations, our understandings. Again, this is a phenomenological insight.

“We are in a reciprocal relationship with our environments; again this is a phenomenological insight.”

How does it relate to art?

“It relates to art in two ways. First, if we are interested in a philosophy of experience, then what we can look at is art as not being about objects but about experiences. So rather than thinking ‘What is art?’ – thinking about a particular set of objects – we can ask ‘When is art? When is art being experienced?’

“The second point is that, for Merleau-Ponty, art itself is a way of philosophising. Certain aesthetic experiences and artistic practices are ways of thinking about meaning, and our place in the world. So in some respects a painter like Cezanne is doing a type of philosophy.

Is the implication of this that one’s consciousness or body is engaged at a higher level if an artwork stimulates a number of senses rather than sight alone?

“I think so, but I would be wary of higher and lower metaphors because that suggests a hierarchy of experience. I think all artworks are not just things that are looked at.”

But does the rather sanitised environment of the art gallery deprive people of the full experience of artwork? Would it be worthwhile, for example, to have the smells and sounds of medieval life wafting through the respective period wing of the National Gallery?

“Possibly but that might also be one of the interesting things about an art gallery - that there is a different type of reflection that goes on in there: you’re not distracted by traffic, or mobile phones, or manure, or whatever, and precisely for that reason you attend to the act of looking and experiencing in a slightly different way.

“People are very critical about the gallery space as being a sterile environment that shuts away everyday life. I think it’s great that there are moments and spaces that you can go into and think about experience, and think about it in a very special and profound way.”

ASK A SAGE
Question: It’s my spouse’s birthday coming up; any gift ideas?
Simone weil replies: “Attention is the rarest and purest form of generosity.”

The best family-friendly films on Netflix
10