Vincent Browne lorded it over his hapless guests in a self-aggrandising panel show, and the writers of Southcliffe mercilessly played with the viewers’ emotions 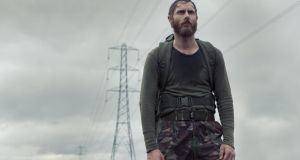 For its first serious foray into religious programming, TV3 went old school. None of your Kumbaya guitar strumming or soft explorations about the meaning of life: this was a bare-bones studio discussion, and the tone, set by its host, Vincent Browne, was hectoring, dogmatic and preachy. It’s called Challenging God with Vincent Browne (TV3, Sunday). Not “discussing” or “exploring”: the combative approach was knitted in from the start.

Browne gave a lengthy introduction quoting from the Book of Genesis. Although he didn’t believe in God, he said, “the idea of wrestling with God strikes me as intriguing”. The central question – there’ll be a different one each week – was which came first, God or man, or who invented whom.

His guests, the theologians James Mackey and Fainche Ryan and the chairman of Atheist Ireland, Michael Nugent, had the slightly baffled but wary air that’s the standard look for Browne’s panellists on his nightly discussion show. Though you’d have to be quick to catch their names: Browne introduced them fleetingly, and their names never appeared on screen during the programme or in the final credits.

It all seemed to underline that this was Browne’s show and that the panellists, marooned on straight-backed chairs in the large, badly lit studio, were there to absorb whatever was thrown at them.

“Are all theologians condescending? Do you have to be a condescending twit to be a theologian?” he barked at Mackey, effectively shutting him up for the rest of the programme. He told Ryan she was talking “gobbledegook”, but she, quiet-voiced, battled on. Nugent floundered. “You’re just making this up,” was one of his responses to Mackey. It was a mostly bad-tempered, unproductive and – this is the worst sin – boring programme.

Browne popped up again, as a contributor, in the excellent Print and Be Damned (TV3, Thursday), the first in a new series about Irish newspapers. The first part mainly explored the role investigative journalists have played in uncovering uncomfortable truths about our country and culture. Its presenter, Donal MacIntyre, looked at scoops and resulting shockwaves, from the Kerry babies story – doggedly pursued by Nell McCafferty – to Michael Farrell’s Daily Mail exposé of aspects of the Quinn family business through taped conversations in Ukraine.

It explored, briefly – it’s a huge subject – why political corruption and clerical child abuse lay undiscovered or ignored by journalists for decades, giving the broad explanation of an imbedded culture of deference to the church and the political establishment.

The programme’s own scoop was getting Peter Murphy, the 39-year-old son of Bishop Eamon Casey – it’s hard to deny that, now: he’s the image of him – and Annie Murphy, on camera. Nearly a quarter of a century later, and with all that has been revealed since, it seems nearly quaint that when The Irish Times broke the story about a bishop fathering a child it was truly shocking. What elevated this lively programme from a “reeling in the print years” look back were its interviews with some of the journalists involved in the many stories, including Eamon Dunphy, Olivia O’Leary, Ann Harris, Brenda Power and Conor O’Clery. There were a lot of scoops and scandals to cram in – and many left out, too; if anything, the first episode of Print and Be Damned tried to do too much. Still, at a time when there’s a knee-jerk response to blame “the meeja” for just about everything, and to sound the death knell of newsprint, this was an easy-to-digest reminder of the value of good journalism.

Some of the newspaper scoops showed that truth can be stranger than fiction, but Southcliffe (Sunday and Monday), Channel 4’s new drama, was so chillingly close to real events that it came with helpline information for viewers who may have been affected by it. It’s very good, eerily real and authentic, probably because the killing sprees in Hungerford and Cumbria are still fresh in the memory.

The first murder in Southcliffe, the unremarkable (fictitious) English town, happens in the first scene. On a wintry morning an elderly woman is in her garden when there’s a bang; she looks up, and then down at the rapidly spreading bloodstain on her floral blouse, and in the distance we see a figure run off. From then on, writer Tony Grisoni and director Sean Durkin mercilessly play with the viewer, shifting between the past and the day of the shooting spree. They change the point of view to introduce characters who we immediately fear will meet a grisly end or spend a damaged lifetime coming to terms with the horrific day. And they snap between moods, from raucous good times in the pub to the desperately sad scenes of the shooter, Stephen (Sean Harris), caring for his demented mother.

It’s a quiet drama with no extraneous mood music, while a grey mist envelops the town like a damp blanket, keeping the horror contained. In real life, in the wake of one of these shooting sprees, there’s an attempt to find out why. Southcliffe is doing that too by delving into the shooter’s life as a lonely fantasist, but we’ll have an impatient wait for episodes three and four to see if it fully succeeds.

Make Me a German (BBC Two, Tuesday) sounds like a craft kit for despairing eurocrats – after all, we wouldn’t be in this mess if we all behaved like thrifty, law-abiding, hard-working Germans. Or would we? For this quirky and entertaining documentary, the London-based journalist Justin Rowlatt and his wife, Bee, spent time living like a typical – okay, stereotypical – German family in Nuremberg. He worked in a pencil factory while she stayed at home, like most mothers, looking after her small children. The German word for working mother translates as a raven – a bird that abandons its young – so there’s little ambiguity in attitude there.

Stand-out differences in cultures included the workplace – no chatting or personal phone calls – and the policeman calling around to explain that their children were too noisy on Sunday mornings and that there are laws against that sort of thing. Bee liked the €159-a-month kindergarten but was horrified by the four and a half hours a day she was supposed to spend cleaning, like the average German hausfrau. That sounds like too high a price for economic stability, if you ask me.