Homeland is back, a look at the physical toll rugby takes, and Maia Dunphy on childbirth are this week’s television highlights 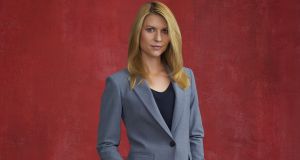 You just can’t keep a good agent down. The indefatigable Carrie Mathison (Claire Danes) is back and facing a whole new world of peril in the fifth series of Homeland. As if terrorists, traitors and spooks aren’t enough to deal with, she also still has to grapple with her inner demons.

When we left Carrie at the end of series four, things had gone pear-shaped in Islamabad, where she was the CIA’s station chief. Two years later, disillusioned Carrie has left the CIA and is living in Berlin, where she works for a private security firm. But a data breach in the CIA pulls her back into a world she hoped she’d left behind. We thought Damian Lewis’s departure after season three would kill off the show, but we reckoned without Danes’s star power.

In her first TV documentary, Maia Dunphy explored the world of pregnancy and maternity with a somewhat detached eye. Three years later, in Maia Dunphy’s Truth about Childbirth, she’s right in the thick of things as she awaits the birth of her first child with a trepidation verging on terror. To help her over her preggo-phobia, she meets women who have given birth in various contexts, including within Scientology (what, does Tom Cruise deliver your baby?).

These Walls Can Talk

There are two ways of remembering St Joseph’s School for Deaf Boys in Cabra. On the one hand, the school offered deaf children a chance of an education and a future; on the other hand, the terrible abuse that took place there has left many scarred for life. In These Walls Can Talk, Amanda Coogan looks at both sides of the St Joseph’s story, from her deaf parents’ fond memories of the school to others’ traumatic recollections of physical and sexual abuse there. So embedded was the culture of abuse that an entire chapter of the Ryan report was devoted to the school. In 2011, the 150-year-old institution was demolished, but many of its pupils’ bitter memories remain.

When you’re watching Ireland (hopefully) knocking the stuffing out of the other teams at the Rugby World Cup, you’re watching the human equivalent of a demolition derby. When these players make contact, it can be the equivalent of being hit by a small car. Hidden Impact: Rugby and Concussion looks at the price paid for winning at all costs. With contributions from Ronan O’Gara, Johnny Sexton and Conor O’Shea, and true stories that’ll make your hair curl, this documentary will make many parents consider getting their little darlings off the rugby team and signed up for tiddlywinks.

Rooney: The Man Behind the Goals

He may not have the glamour of Beckham or the terror-inducing glare of Keane, but Wayne Rooney is officially England’s greatest goalscorer, having recently smashed the record held by Bobby Charlton for nearly 50 years. Rooney: The Man Behind the Goals takes us behind the scenes to meet Rooney, his wife, Coleen, and their children Kai and Klay. Presented by Gary Lineker, and with contributions from Becks and Sven-Göran Eriksson, among others, the programme promises to show what Rooney is like out of the spotlight (but with a TV crew around him, obviously).

You can move to a remote part of the country, but you can’t leave your past behind, as ex-constable Claire Church discovers in new crime drama series From Darkness. Anne-Marie Duff plays Church, a woman haunted by an unsolved case from 1998 in which a number of women went missing. When long-dead bodies are found in Manchester, her former colleague (and former lover) DCI John Hind (Johnny Harris) suspects they may be linked to the long-cold case, so he tracks Church down to her island idyll to persuade her to join the investigation. “From Darkness is all about fear,” says series writer Katie Baxendale. “Fear of the past and its ability to overwhelm us, fear of violence, fear of our desires and mistakes and the shame that they breed.” Part one aired on Sunday, with part two due this weekend.