Time to press ahead and secure the future of journalism

Opinion: as journalists from 180 countries assemble in Dublin today, the mood is anxious but determined 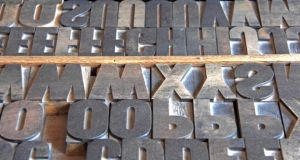 “Many journalists have seen their world of journalism shrunk in a matter of years. Not just the job culls which have now reached tens of thousands, but stories, page count, sections, international, national and business news have been scaled down. Some describe it as death by small cuts. Many skillsets have almost vanished. Subs, or copy editors, have been reduced and full-time photographers have become an endangered species.”

Not surprisingly it is journalists who are at the heart of the debate looking for solutions to save journalism. As 400 delegates representing journalists from 180 countries prepare to assemble today at Dublin Castle in the biggest gathering of journalists in the world, the mood is anxious but cold sober.

These days you cannot start a debate on the future of the media without referring to the situation in the US media, where the epicentre of the earthquake that is engulfing journalism as we know it can be located. It is there that the grinding of the major tectonic plates of the media industry is taking place. Here in Europe we are only feeling the ripples, but they have become stronger and it won’t be long before our media here starts to shake.

Many of these journalists have seen their world of journalism shrunk in a matter of years. Not just the job culls which have now reached tens of thousands, but stories, page count, sections, international, national and business news have been scaled down. Some describe it as death by small cuts. Many skillsets have almost vanished. Subs, or copy editors, have been reduced and full-time photographers have become an endangered species.

A whole generation, best described by David Simon of the Washington Post as the “starry-eyed acolytes of a new church” armed “with dog-eared paperbacks of All the President’s Men”, who believed in a future of bylines and column inches and five-part series with sidebars, takes to task media managers who have seriously lost their way. They blame them for missing out on developing their online market and complacently relying on the mantra “who wants to read on screen?”

They seem to have regarded as of greater importance raking in salaries and bonuses in five figures and keeping up profit levels the only way they know how, rather than investing effectively in their newspapers and programme-making. Now they have ended up without a strategy or a business model.

Ransacked newsrooms
Investigative journalist Nick Davies, author of Flat Earth News, caused a sensation by pointing his finger at the knee-jerk reaction to the downturn by media corporations: “They say the internet is the problem and the credit crunch has made it worse, but they have already ransacked the newsrooms for profit. The problem is clearly financial, but the solution is political”.

In a panic, media companies undertook to try and turn around the disastrous dip in sales with the craziest stunts, some giving away millions of free CDs and DVDs, others millions of free copies in bulk to maintain circulation levels.

Quality journalism is labour intensive and costs money. Balance sheets and sales figures obviously matter, but there is now a more sustained effort to explore other ways to fund journalism. And it is not just about whether the future lies in hybrid techniques and a digital world or traditional media.

Among the new schools of thoughts, and the new journalism gurus springing up everywhere, the Future of News (FON) consensus is pioneering new thinking of a journalism geared to the leaps and bounds of new technology and to the behaviour of new audiences in a networked world. US-based Pew Research Center found that 65 per cent of people aged 18 to 29 get their news from the internet, outpacing television for the first time. Such trends forced media organisations to try and meet the challenges of the digital era.

Their mantras, now adapted to the Silicon Valley engineering culture, switched to the new delivery platforms, the benefits of networked news, engagement with readers and new forms of storytelling, live blogging and the rise of user-generated content. Even Rupert Murdoch quipped: “Our real business isn’t printing on dead trees.”

“Trading dollars for dimes” has become the new thinking behind the main arguments on paywalls and charging for digital content, aggregation business and the impact of the iPad and the e-reading revolution, giving media businesses a second chance to recover from the terrible missed opportunity during the advent of Web 1.0.

Another trend is involving small news organisations building viable businesses at grassroots community level through hyperlocal networks with limited resources. Many journalists started thinking outside the “capitalist box” in coming up with new business models – in particular some that don’t involve making profits.

The rich debate on the future of journalism opened a Pandora’s box.

Some are more in favour of newspapers being turned into charities via endowments from rich philanthropists. Not to forget those who want local authorities to provide start-up money for new local media initiatives.

Others have been arguing for a state stimulus. Indeed, if journalism is to be a public good just like education or public health, why not discuss with governments giving print newspapers tax subsidies or an educational status? France gives €1.5 billion in direct and indirect state aid to the press each year.

Most future-of-news gurus remain focused on macrosolutions such as establishing a gatekeeper of the web for all content, or micropayments where papers would sell news stories like songs are sold on iTunes, or making newspapers aggregators for online content and offering a seal of approval for their credibility.

Perhaps the best illustration of the search for the holy grail of the newspaper business still lies where it began as illustrated in this story by the Australian describing Alfaj Ali as he smiles to another customer from his stand at Kolkata central station. “It’s a good business,” he says, passing over a copy of the Bengal Post and tucking the proceeds – about 2.5 rupees (5.5 cents) – into a sock. “Every year I sell more. These days everybody wants a newspaper.”

Jim Boumelha is president of the International Federation of Journalists, which holds its world congress in Dublin this week, starting today

Ireland’s industrial heritage: the past you might not know we had
6