The eight best shows to watch on Netflix in April 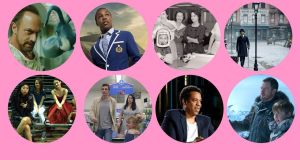 Behind the Curtain: Todrick Hall
From April 5th

Choreographer, singer, YouTuber, drag queen, actor, dancer, director, semi-finalist in American Idol and judge on RuPaul’s Drag Race, cultural polymath Todrick Hall is a multi-talented marvel. At the age of 32 he has managed to accomplish a head-spinning amount of work including a 20-song visual album/live show Straight Outta Oz, inspired by the Wizard of Oz (by way of Beyoncé’s Lemonade), that tells the tale of his meteoric journey to the top.

Behind the Curtain is the documentary feature that follows Hall as he assembles the show and the struggles he encounters along the way. It also touches on his relationship with his mother, his experience of coming out and how the hard-working, ambitious small town boy handles his new found fame.

David Letterman: My Next Guest Needs No Introduction – Jay- Z
From April 6th

Who could blame David Letterman from wanting to rediscover the lost art of the “conversation” for his Netflix chat show? After decades watching the format devolve into promotional soundbites, prepared punchlines and seeing presenters such as James Corden dole out empty, bland pleasantries, the Late Show veteran was coaxed out of retirement with this monthly series of intense hour-long specials.

The show, with its stark set-up – just two chairs facing each other, without a desk, without the distraction of a set – is almost a throwback to the serious discussion programmes of the 1960s where guests wore suits and smoked with louche abandon, the kind of show where Norman Mailer would threaten to punch someone. Although strangely with Letterman being such a master of the medium of television, the show’s biggest influence seems to be the intimacy and freewheeling formula of a podcast such as Marc Maron’s WTF.

With previous shows featuring such weighty guests as Barack Obama and Malala Yousafzai talking through their ambitions and fears, discussing politics and human nature, it can be rather worthy but with Letterman’s prickly attitude the conversations can take unexpected turns.

It will be interesting to see what the host will manage to reveal or discover about consummate professional Jay-Z, who oftentimes when interviewed can slip into business/self-help jargon like an inscrutable motivational speaker. Hopefully with the hip-hop mogul appearing to be more open (lyrically at least) on his last album 4.44, he’ll be ready to engage with Letterman on a personal level – although probably don’t expect any exciting at-home-with-Beyoncé anecdotes or explicit references to their recent marital strife.

The latest indie film offering from the streaming service is 6 Balloons starring Broad City’s Abbi Jacobson as Katie. the put-upon sister to Dave Franco’s self-destructive Seth. As heroin addict Seth relapses one night, Katie finds herself desperately circling around LA with her brother and his young daughter attempting to find him help in any way possible.

Based on producer Samantha Housman’s own experiences and written and directed by Marja Lewis-Ryan, it’s a bare-boned, sinewy drama that tightly focuses on the strained family dynamics. An emotionally bruising, powerful story showcasing both of its leads who are famous for their comedic acting, more dramatic abilities.

Lost in Space
From April 13th

Be warned, this is not your grandad’s Lost in Space. There is no trace of the campy ridiculousness of Irwin Allen’s 1960s space sitcom in this Netflix reboot nor does it resemble the 1998 Gary OIdman version, which thankfully seems to have been expunged from the collective cultural memory.

This is the interplanetary paranoia of Ridley Scott’s oeuvre but transplanted into a family-friendly action-adventure series. This modernised version sees the space-colonists clan crash landing on an unidentified planet and the challenges faced when attempting to adjust to the alien terrain. Although the Robinson family are not alone, not only are there cosmic creatures to confront but other humans who have found themselves adrift in the universe.

Starring indie-queen Parker Posey in the role of Dr Smith – a neat gender flip – and written by Zack Estrin of Prison Break fame, it’s escapist sci-fi entertainment at its most broad, with Estrin describing the appeal of the show as “more Star Wars than Star Trek”.

The Alienist
From April 19th

Bruhl heads up an all star cast that includes Luke Evans as newspaper illustrator John Moore and Dakota Fanning as Sara Howard, a plucky secretary who has dreams of becoming New York’s first female detective. Adapted from Caleb Carr’s novel for television by the True Detective director Carey Fukunaga and Drive screenwriter Hossein Amini, it has all the intrigue of Sherlock but with a darker more graphic edge. With visual flourishes that give a nod to Coppola’s Dracula and Soderberg’s sadly defunct medical drama The Knick, it’s an intriguing look at the genesis of psychological profiling in the Gilded Age.

A coming -of-age film about four best friends contemplating life and love as the final two weeks of their high-school days draw ever closer. Directed by Olivia Milch – the writer of the all-female Ocean’s 8 – and starring Pretty Little Liars Lucy Hale, it’s a film that focuses on the possibilities that unfold in that unique time as the gang are touched by grief and come to terms with the idea of letting go of the relationships that shaped their young lives.

Mercury 13 is the story of the women who were tested for spaceflight in 1961 but whose dreams were thwarted as Nasa eventually chose all-male military pilots to become the first astronauts. It’s a documentary about aspiring, determined women who were pioneers, forging a new way of life for themselves within male dominated spheres.

With the success of Hidden Figures, another account of women striving to be accepted within NASA’s space programme, there is clearly an appetite, no, a thirst, to finally acknowledge and give some much-deserved recognition to the groundbreaking work and achievements of all-to-often overlooked women.

“My life is an ever-swirling toilet that just won’t flush,” grunts crazed ex-cop turned hitman Nick Sax (Christopher Meloni) but his desperately chaotic barfly existence kicks up a notch when he becomes haunted by a tiny flying animated unicorn Happy (voiced by Patton Oswalt) who needs his help. The odd couple must work as a team to solve the mystery of a missing child in this goofy gonzo caper.

Based on the graphic novel by Grant Morrison and Darick Robertson and directed by Brian Taylor (Crank), it’s Who Framed Roger Rabbit written by Elmore Leonard or a Guy Ritchie version of My Little Pony. Where cartoon violence meets extreme, gory bloodshed and dark themes twist through the over-the-top fantasy elements, Happy! is s a non-stop escapade an off-kilter, manic ride that’s not for the fainthearted.