The actors in the Big Bang Theory comedy show are about to become the highest paid in TV history, as shooting begins on an eighth series. But has the world’s most watched comedy programme lost its edge? 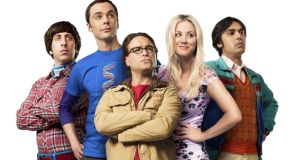 ‘Television comedy is an intentional act whose primary purpose is to cause laughter; this is understood as such by the audience. The Big Bang Theory is television comedy: a traditional sitcom that follows a half-hour formula centred narratively on recurring characters in common environmental settings.”

That paragraph sounds as if it has come from the mouth of Sheldon Cooper, one of the show’s stars. In fact it’s from an academic paper called Abjection, Outsiders and Others in The Big Bang Theory, by Myc Wiatrowski. Wiatrowski’s paper is one of hundreds on the subject.

That a television sitcom has attracted academic interest sits nicely alongside the show’s geek-chic appeal, its scientific in-jokes and its cameo appearances by the likes of Stephen Hawking. But this show is all about the biz. This week we learned that the programme’s stars are set to become the highest-paid television actors in history.

Filming for season eight of the world’s most-watched comedy show is due to begin next Wednesday, but there is a problem. Jim Parsons, who plays Sheldon, Johnny Galecki, who plays Leonard, and Kaley Cuoco, who plays Penny, have yet to sign their contracts – and won’t do so until they are offered about three times what they are currently paid.

Last season the trio were on $350,000 each per episode, plus 0.25 per cent of the show’s back-end profits. They now want $1 million per episode, plus a bigger share of the profits for seasons eight, nine and 10.

The current highest-paid actor on television is Ashton Kutcher, who receives $750,000 for each episode of Two and a Half Men. For the final series of Friends the six principals were on $1 million per show, but they weren’t in a profit-sharing scheme. Over its seven seasons so far The Big Bang Theory has made hundreds of millions of dollars (one estimate runs to $3 billion) through international transmission deals – it is shown in more than 80 countries, including Ireland – repeat fees and merchandising income.

Dermot Horan, RTÉ’s director of acquisitions, says the programme is “the highest-performing US comedy on RTÉ Two, beating the likes of Two and a Half Men, Two Broke Girls and New Girl. It rates best when it is a brand-new series, which we should be bringing to RTÉ Two later this autumn. However, it also repeats very well – better than other sitcoms.”

Unusually for a sitcom, each season has attracted a bigger international audience. More viewers, more dosh. Parsons, Galecki and Cuoco began on $60,000 an episode, then went up to $200,000 per episode for season four and, after that, to $350,000 plus profit share. Now it’s $1 million or bust.

The show’s creator and writer, Chuck Lorre (who was also responsible for Two and a Half Men), said this week that the cast are worth every penny: “This will work itself out. I want them all to be crazy wealthy, because nobody deserves it more than this cast.” Except, perhaps, the relatively poorly paid Big Bang Theory writers who put the words into the actors’ mouths.

Nina Tassler of CBS, which broadcasts the show in the US, said this week, “We’re feeling very confident everything will work out. These deals work out every year.”

Ironically – spoiler alert – season eight is all about how Penny gets a new job with a pharmaceutical company (she was previously a waitress) and begins to make tons of money, which strains her relationship with Leonard, her boyfriend. Art imitating wage demands.

There’s big money in geek chic. The Big Bang Theory arrived in 2007 just as Mark Zuckerberg was being crowned king of the geeks – and as being good at maths and physics became a boast, not a social embarrassment.

But there was always a problem with Big Bang. The first few seasons concentrated on four male characters – Sheldon, Leonard, Howard and Raj – with just one female, in Penny. The scripts were tight, and the acting and direction superb, but there was only one will-they-won’t-they relationship to play with.

The show had to adapt. The solution? Become the new Friends. They already mirrored one another in several ways: a group of young, single friends live next to each other; a guy from one of the apartments starts dating the girl from across the hall; both series have a catchy theme tune; and they even have the same slot in the schedule, at 8pm each Thursday.

Penny has melted, of late, into Rachel from Friends – the same mannerisms and interrogative speech pattern, the same roll-your- eyes-that’s-men-for-you expression.

And Big Bang now has, just like Friends, three lead men and three lead women. Bernadette (Melissa Rauch) was brought in to marry Howard, and Amy (Mayim Bialik) was given the not insubstantial task of eroticising Sheldon. The sole ethnic-minority character, Raj, has been marginalised.

It seems that, dazzled by dollar signs, The Big Bang Theory has sanded down its edginess to a smooth ratings-winning formula. It has become Friends Reunited, sitcom’s tribute show.