Television: Kevin McGeever stung by his own ridiculous sting 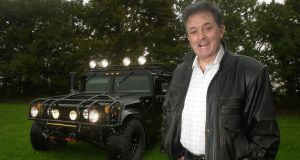 My guess is that there are a great many people who need to talk to Kevin McGeever – those many people whom the 71-year-old scammed out of money in a long career of pulling elaborate, multimillion-euro fast ones on several continents.

We Need to Talk About Kevin (RTÉ One, Wednesday) is a timely documentary: the Mayo-born fraudster is fresh in our minds, having been in court earlier this month. McGeever was charged with wasting Garda time in 2013 by making false statements that he had been kidnapped and held for eight months in a bunker.

The elaborate “kidnapping” made international news. Catherine Vallely was driving home one night outside Ballinamore, in Co Leitrim, when she came across a seriously unkempt McGeever on the road, and a story that was stranger than fiction. He spun his kidnapping yarn, but Vallely smelled a rat – or rather didn’t. She says she didn’t believe that he had been held captive for months because he didn’t smell.

Vallely is interviewed for Brian Carroll’s film, as are some of McGeever’s victims: their stories quash any romantic idea that McGeever, with his blinging suits and cars, and slick sales patter, was a harmless, lovable rogue. The jaunty lounge music in We Need to Talk About Kevin gives a jarring Hollywood, Catch Me If You Can gloss to the film. It is quite at odds with the shots of McGeever in recent years leaving Garda stations and courthouses looking gaunt, the outline of “thief” (misspelt “tief”), which he said was carved into his forehead while in captivity, still faintly visible.

The documentary has to cover a lot of territory. (McGeever did.) The footage of post-property-crash Dubai, with its unfinished concrete skeletons of skyscrapers, is the most extraordinary, with the vivid report of McGeever’s business model: selling and double-selling apartments off the plans to Irish buyers.

The film leaves many questions unanswered, not least where McGeever was during those missing eight months, growing that impressive beard and shedding considerable weight. He isn’t interviewed on camera – strange, as all the evidence points to a vain man who likes attention – but he does give statements to the film-maker denying any wrongdoing anywhere.

Viewers don’t have to work hard to make up their own minds.

“Strap in for a ride to remember,” says Dr Pixie McKenna in the voiceover at the start of Pixie’s Sex Clinic (RTÉ Two, Tuesday), a nudge-nudge wink-wink opener if ever there was one. But viewers tuning in expecting a hot and sweaty live-action guide to the Kama Sutra will be a little deflated. Instead, episode one (of three) focuses on sexually transmitted diseases and sexual consent.

It is a clear statement of intent that beneath “the crude and lewd language” (McKenna’s warning words) the series intends to be educational and firmly pitched at a teenage and young-adult audience. Despite the general air of giddiness, McKenna takes seriously the show’s mission to be “the first Irish TV series dedicated to education in sex, sexual health and behaviour”.

Seven young volunteers, aged from 18 to their late 20s, come clean about their sexual experiences and take part in several exercises, from condom-fitting lessons and a consent workshop to STD testing and playing “STI bingo”. “That looks sore, number four,” McKenna calls as the seven tick off symptoms on their bingo cards. See, the programme is saying loud and proud, abandoning all attempts at subtlety: learning about STDs is fun.

The unshockable, almost always smiling McKenna is exactly the right presenter: we have seen her dealing, up close and horribly personal, with all manner of oozing boils in private places on Channel 4’s Embarrassing Bodies. A frank-talking group of 16- and 17-year-olds at a Dublin school isn’t going to faze her. “Don’t be silly, wrap your willy,” says one girl, giving contraception advice. A “private sex booth” is set up at a third-level college, and students – youthful freckled faces and GAA jerseys aplenty – pile in to answer very personal questions.

It’s all joyously shame free, with not an embarrassing body in sight. Which makes me wonder if Pixie’s Sex Clinic is, in its out-there, no-holds-barred approach, preaching to the converted. Will viewers less assured than those young people who took part be a little intimidated by their easy frankness? They will learn a lot, though.

To see what culture shock looks like, watch Mark Crosbie’s expressive face as he does his job in Dublin at any point in the immersive, hour-long documentary Toughest Place to Be . . . a Street Cleaner (RTÉ One, Monday; the rest of the series will put other jobs after the dot dot dot).

According to Crosbie, on his normal beat in and around Temple Bar, Dublin’s grubby pub quarter, isn’t physically demanding, “just tedious”.

But there are the chats with the public, security in knowing that his employer, Dublin City Council, is committed to health and safety, and satisfaction from earning “an honest bob”.

Then, for the purposes of the documentary, the grandfather of two travels to the Philippines to work for a week, living and shadowing Mel Macaraeg, a father of six who cleans streets in a crowded, impoverished suburb of Manila. Home is a one-up, one-down tin-roofed shack held together with cardboard. Macaraeg earns the equivalent of €15 a week.

In the morning, in the already searing heat, Macaraeg pushes his rusty wheelbarrow, sweeping as he goes. “Not even a proper brush”, Crosbie says of his scrappy broom. In the afternoon, ungloved, in his wellies and trackie pants, Macaraeg must get down into rat-infested open sewers, to unblock them.

Between retching, Crosbie, his voice lowered in horror, talks about health and safety. Macaraeg shrugs and says it’s for his family – his version of the honest-bob answer.

Crosbie is taken to where the rubbish ends up: Manila’s vast garbage mountain. Hordes of scavengers sift through the rubbish for recyclables to sell or, most horrifyingly, for food waste – bits of chicken, burgers with bites taken out of them – that is washed and eaten.

The tattooed, shaven-headed Crosbie is a tough-looking bloke, but when faced with such deep poverty, matched by human resilience, his emotions rise easily to the surface. He doesn’t transform into a reporter, and doesn’t ask searching questions about economics or politics, Instead he reacts instinctively to the kindness he receives from his hosts, and the dire, relentless poverty he sees around him.

This is the power of this determinedly observational film, which stays in the mind and the stomach – Crosbie isn’t the only one to have a visceral reaction to that sewer trawling – long after the credits roll.