Television: crime and punishment in the sunny southeast

Review: ‘Clean Break’; ‘The Ray D’Arcy Show’; ‘Dark Side of the Greens’ 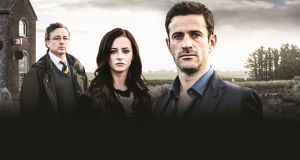 It’s not quite as rare as that orange moon, but a new Irish-made drama on RTÉ is a long-awaited sight. In Clean Break (RTÉ One, Sunday), a new crime series written by Billy Roche, the crime, or at least the one revealed in the first episode, is a tiger kidnapping.

Frank Mallon, a used-car salesman and single father played by Adam Fergus, is deep in debt when he hits on a moneymaking scheme. “I have a plan to make a bit of money if you’re interested,” he tells the local hard chaw, Noel Blake, who is played by Ned Dennehy, the go-to actor when an Irish drama needs an instantly recognisable dodgy character. Soon the bank manager’s wife and daughter – in a stand-out performance by young Amybeth McNulty – are kidnapped from their home in a terrifying scene.

Unsurprisingly, there’s a hitch. In a small town where everyone knows everyone, the kidnappers put too much faith in the camouflage ability of knitted ski masks, and the first episode ends on a cliffhanger – one persuasive enough to make you tune in next week.

Clean Break is set in Wexford (although the wide range of accents doesn’t tell you that), but the location is incidental: this is any small town, anywhere, where everyone knows too much about everybody, where making good means buying the big house out the road and where, with its closed shops and empty streets, there’s an air of recession hangover.

There is also another crime, briefly noted: a body-shaped roll of carpet is thrown in a river by two suspicious types. And I suspect that the mild-mannered bank manager (Aidan McArdle) isn’t as he appears.

It’s not just his long, stagey speech railing against bankers. (“These fellas at the top could wine and dine till dawn. They sucked us dry and then hung us out in the open for the whole world to see.”) It’s not even his building resentment against the one person in town making money, the uppity casino owner. It’s that he’s rarely seen without an anorak and – the clincher – that he collects stamps.

Clean Break’s cinematic quality gives it the look and feel of a beautifully shot independent Irish movie, and its pace and straightforward exposition of plot and character suggest there won’t be too many surprises.

On the many strengths of the first episode, there’s enough to pull you back in to find out just who is going to make a clean break from the town as the fallout from the kidnapping – and that rolled-up carpet – unfolds.

Despite tantalising hints of something new and different in the run-up to its debut, The Ray D’Arcy Show (RTÉ One, Saturday) turns out to be a standard Irish chat show, a close relation (an Irish twin?) in style and content to The Late Late Show.

Which begs a question: why, when the Late Late has such obvious trouble finding interesting guests – those creaky jokes about the RTÉ canteen being the source of so many guests aren’t funny for a reason – does the station feel it needs two similar chat shows on consecutive nights? Is there really that much chat to go around?

D’Arcy has been in broadcasting for nearly 30 years, and he brings his family-man radio persona to the screen. It starts with an awkward opening monologue about his son that even the boy’s granny would be pushed to find interesting.

His first sofa sitters tick the Late Late guest-list primer: a sportsman (Donncha O’Callaghan, although won’t rugby fans be watching Wales beat England at the Rugby World Cup?); a human-interest story (an obese British man who was bullied online); a band (Wheatus, singing their 15-year-old hit Teenage Dirtbag); a car giveaway; and a tabloid celebrity (the X Factor ex-judge Tulisa Contostavlos, who, acknowledging her current place in the star firmament, vows that “there’ll be a Tulisa comeback soon”).

And let’s not forget Tommy Tiernan, because it’s the law since Gaybo’s time that every Irish chat show has to have the comedian.

The set is Saturday-night blingy, with an obligatory sofa, desk and what looks like a high chair for D’Arcy – who frequently asks guests, apropos of nothing, about their height. It’s a question that is unlikely to coax an entertaining response.

Unless there’s an energy injection from somewhere, the show changes its guest formula, and D’Arcy gets comfortable looking into the camera and interacting with the audience, The Ray D’Arcy Show is your old-fashioned, predictable chat show. Grand, if you like that sort of thing.

My gut tangles in wince-inducing pain when I hear the name Donald Trump. That’s not because of his gaffe-prone presidential campaign but because I flash back to his visit to Ireland: the red carpet was rolled out and Michael Noonan stood at the foot of the aircraft steps to greet the bouffant billionaire while a trio of performers in evening dresses belted out an Irish tune on the windswept tarmac.

As a show of forelock tugging, or maybe the definition of a nation with a deep inferiority complex, you think it can’t be beaten – until you see Dark Side of the Greens (BBC Four, Wednesday), where Scottish officials seem equally in awe of Trump. Later in the film, in Dubrovnik, another billionaire is presented by the city’s mayor as some sort of saviour. And the common denominator: golf courses.

Made by Anthony Baxter, this sharply observed film is a follow-up to his award-winning You’ve Been Trumped, which charted the Donald’s plans to build a second golf course in Aberdeenshire – much to local, though not official, opposition. Dark Side of the Greens broadens the subject out to also explore the environmental impact of golf courses, with insightful contributions from environmental activists, ranging from passionate locals to Alec Baldwin and Robert Kennedy jnr.

And the impact is huge, from the water needed to maintain the world’s golf courses – it could meet 80 per cent of the world’s drinking-water requirements – to the chemicals used to keep all that grass green. And there’s the destruction of areas of natural habitat and beauty the world over just to have smooth greens for rich people to play on. Never again will you think of golf as a benign sport.

But, as good as this documentary is, I’m not sure I can forgive Baxter for reshowing those images from the Shannon tarmac and the dribbling awe with which Trump was received, and replanting them so vividly back in my brain. tvreview@irishtimes.com