Taken Down: Everybody here had blood on their hands 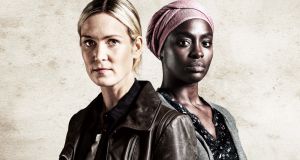 Taken Down was divided between its female leads, a wooden Lynn Rafferty and a magnificent Aïssa Maïga

Good TV drama takes us to places we ordinarily never see. The best kind makes it feel vividly real. Despite the suggestion of its title, Taken Down (RTÉ One, Sunday, 9.30pm) was hardly a verbatim drama. Anything you say might be “taken down” and used in evidence, Brian Gleeson’s corrupt and comically dissembling Direct Provision centre manager, Wayne, was warned at his arrest.

Jo Spain and Stuart Carolan’s show, with its eye-opening depictions of the stultifying conditions within Direct Provision, often seemed just as attentive.

Shortly after this solemn drama debuted, an RTÉ documentary A Woman’s World featured one asylum-seeker’s vivid report of life in Direct Provision. Within it, she explained the precise circumstances in which a young woman might experience sexual objectification, mandatory unemployment and male exploitation that made prostitution a tragically banal process. Taken Down may have used dramatic licence, but it knew whereof it spoke.

In other respects, like the culture of gang-operated brothels or unisex gardaí badinage, you either took the show’s word for it or let your attentions snag on stray details.

That a brothel might operate just off O’Connell Street, and welcome furtive clients with a cadre of intimidating former African child soldiers, I just about bought. But that a uniformed guard might make it all the way through Templemore with a Man Bun intact, and be nicknamed, unironically, “Brains”, rather than, say, “Garda Man Bun”, was a bit of a stretch.

Taken Down, however, was always a show divided between two female leads who each had reason to be guarded. The first was the struggling Abeni, a widowed mother in Direct Provision, torn between saintly concern and deep compromise, given a magnificent performance by Aïssa Maïga.

The second was Inspector Jen Rooney, a cop wholly without character, given such a wooden performance by Lynn Rafferty she seemed mostly whittled.

For the show’s finale, Jo Spain and Stuart Carolan’s drama refreshingly afforded some perspective to its victim, Esme (Marlene Madenge), the young Nigerian found dead at a bus stop, replaying a scene we had seen before, her last morning, through her own eyes.

In a programme where one police interviewer threatened the manipulative brothel boss Benjamin (Enoch Frost) not with charges of human trafficking or murder but tax fraud, it never seemed likely that Esme would get justice. At least her story would be told.

Esme’s fate was not as ghoulish as Wayne’s bacchanalian stag party videos had hinted, nor as sadistic as the unnerving attentions of Jimmy Smallhorne’s predacious gangster Gar or Reomy D Mpeho’s hollowed-out enforcer Toby intimated, but instead the rash act of a jealous woman, Phina Oruche’s madame, Marvellous.

That might have seemed like a sexist cop-out – women beware women! – but the wider point was that everybody here had blood on their hands.

Esme, abandoned and left to die, had been steadily dehumanised long before – by a trail of sleazy men, by a criminal gang, by an indifferent system. The captive Flora, raped and groomed to replace her, just about escaped.

The series could have been much tighter (and easily two episodes shorter) overstretching its plot while leaving characters undeveloped. That made much of its action bizarrely gung-ho, like a two-team surveillance mission summoned to follow a journey made by double-decker bus (“We lost her!”).

Its keener impact actually came in quieter moments, like director David Caffrey’s melancholy shots of Dublin at dawn, the sun rising over stalled cranes and idle scenes. That inertia bolstered a creeping feeling, one brought about by leering opportunists and inhumane systems, that here was a murder drama in which the lives of the most vulnerable barely mattered.