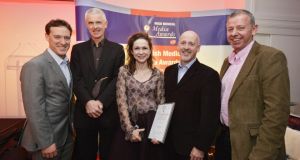 Six Irish Times journalists have been honoured at the annual GSK Irish Medical Media ceremony which is being held in Dublin tonight, more than any other news organisation.

Kitty Holland who broke the story of the death of Savita Halappanavar in November 2012 received the Story of the Year Award.

The judging panel praised Holland for her “involvement with this story from the beginning, her commitment to demonstrating the impact of the death on the Halappanavar family and the story’s profound medical and social significance”.

The Irish Times also received the Digital Media Award for a collaboration by graphic designer Paul Scott, chief reporter Carl O’Brien and photographer Bryan O’Brien entitled After the Asylum, a project which examined community mental health services through the experiences of three people.

The Consumer Print Media Award was jointly awarded to Irish Times health correspondent Paul Cullen and industry correspondent Martin Wall for their coverage of the location of primary care centres after the Minister for Health James Reilly added two locations in his north Dublin constituency to a HSE list of chosen centres.

RTE reporter Rita O’Reilly and producer Tara Peterman jointly received the Journalist of the Year Award for a documentary on the side effects experienced by Irish soldiers after taking a malaria drug and the consequent legal, medical and political repercussions. The judging panel described their investigative report as “authoritative, comprehensible and sensitive”.

Joe Leogue was named Young Journalist of the Year for a story he broke in The Corkman examining a litany of failures to adequately respond to child protection concerns expressed by the Children’s Ombudsman which left children in the North Lee area of Cork exposed to risk.

Other journalists recognised for their contribution to health journalism included John Cooke of Clare FM for his exploration of ovarian cancer, Sara Burke for her investigation into inequalities in the Irish adult mental health system for RTE Radio 1’s Drivetime programme and Mary Carroll of Today FM for her documentary on cancer in teenagers.

Entries to the GSK Irish Medical Media Awards were judged by an independent judging panel chaired by the broadcaster John Bowman.

Dancing With The Stars backstage: ‘I’d love to see Danny Healy Rae out there’
3