RTÉ unveils dramatic details for the TV year ahead 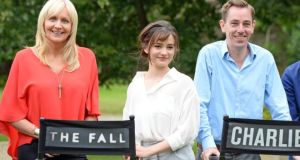 Aisling Franciosi (centre) of The Fall, with presenters Miriam O’Callaghan and Ryan Tubridy at the launch of RTÉ’s new season of programming. Photograph: Eric Luke

"Why do we do it? Chase power. Cling to power – when we’re all destined to lose it someday?” a former taoiseach asks in RTÉ’s forthcoming series of biopics, Charlie.

Over in Love/Hate land, the central character left standing, Nidge, played by Tom Vaughan-Lawlor, might once have used less grand words to ask much the same question. But as the hit drama opens its fifth series, Nidge has managed to shake off his debilitating paranoia and clings on.

Charlie, a trilogy of feature-length dramas, shares a star with Love/Hate in Vaughan-Lawlor, who plays PJ Mara to Aidan Gillen’s Charles Haughey. And like the Dublin gangster drama, Charlie is an expensive proposition, having been produced by RTÉ, Element Pictures and Touchpaper Television with the aid of €1 million in licence fee money from a Broadcasting Authority of Ireland fund.

RTÉ cannot afford to produce a lot of quality drama, so for its 2014-2015 season, it is concentrating on the dependable ratings banker that is Love/Hate (the second most-watched programme on Irish television last year), and a national conversation piece such as Charlie.

The latter looks set to be the kind of series that inspires people who don’t usually watch small-screen drama to tune in, if only to check out the comb-overs. The other main event in what RTÉ Television managing director Glen Killane calls “a really strong drama slate” is the second series of The Fall, which is a smart one for RTÉ, in the sense that it is set in Ireland but mostly paid for by the BBC.

The yellow chairs from Miriam O’Callaghan’s chat show set were pushed to one side in Montrose’s Studio 4 yesterday, as details of the year ahead on Ireland’s most-watched channel, RTÉ One, were unveiled.

The new schedule looks “documentary-heavy”, one showbiz journalist observed, though there are also plenty of new lifestyle shows in the mix, with titles such as Domestic Divas, The Homeless Choir and Rachel Allen: All Things Sweet.

The arts line-up includes A Poem for Ireland – RTÉ’s search for Ireland’s favourite poem – plus a reassessment of the life and work of writer Brendan Behan presented by actor Adrian Dunbar.

In the list of new religious programming, one title that jumps out is an exploration of “the changing life of the death notice” fronted by Ardal O’Hanlon. It’s called Guess Who’s Dead.

Most of the old staples are also back, though The Late Late Show will be given a “new look” from January, with an updated set and “possibly” new regular segments.

Its host, Ryan Tubridy (pictured), claims he has come to terms with the fact that it is not the same beast as the comedy-based chat shows that dominate UK and US television. The Late Late Show is, he says, “an old-fashioned chat show in a modern world”. And though he felt last season was “the beginning of a Late Late Show reboot for me”, he is now “fizzing with ideas” for the year ahead.

As for Love/Hate, it won’t just be fizzing, it will be “explosive”, according to Killane, while Vaughan-Lawlor says the series will continue to subvert the expectations of the audience, even if it also sometimes frustrates them.

“The sure way of buggering something up is to worry about what people think.”