Mr Robot gets high praise, but it's a lot dumber than it thinks it is

The official trailer for season one of Mr. Robot, starring Rami Malek. 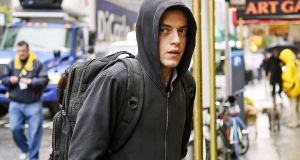 Mr Robot (Thursday, Universal) is about an asocial, morphine-consuming anarchist named Elliot Alderson (Rami Malek) who works for big corporations but hacks stuff on the side, much like Johnny Lee Miller in the film Hackers, except with actual computer code and an intense stare and not with cool 3D graphics, funky roller blades and Matthew Lillard in plaits.

Elliot, we’re led to believe, hacks for good and not evil. He uses his mad computer skillz to capture peddlers of child pornography, thwart drug-dealing rapists and expose the adulterous ways of his therapist’s boyfriend (his other hobby is stalking people).

Why does Elliot do such things? “My dad was the only person I could talk to, but he died,” he tells the ensnared child pornographer in the first scene. Then he tells him/us about his father’s radiation-induced death thanks to the nefarious company he worked for.

It’s the equivalent of starting a Batman movie with that particular rubber-clad freak yelling “My paaarents are deaaaaaad!” at the Joker. It’s Elliot’s origin story. It also kind of makes nonsense of the idea that Elliot can’t talk to people. We’ve only just met him and he’s already totally opening up to an internet predator.

That’s just the kind of programme Mr Robot is, one that will never subtly reveal something when it can shove it down our stupid throats in a mouthful of dialogue.

Stop liking me, I’m a misfit
For an eccentric non-conforming misfit who plays by his own rules, Elliot does okay. He has a good job, a loyal best friend who sort of fancies him and he has sex with the manic-pixie-dream-drug-addict who lives upstairs. On the other hand, he also wears a hoodie, goes to a therapist, likes morphine and says outrageous things like (block your ears, sensitive types): “I hate Facebook.”

Elliot’s worldview comes to the fore in a scene with his therapist during which he has a good old rant.

“We collectively thought that Steve Jobs was a great man even though we knew he made billions off the backs of children,” he begins, somewhat disingenuously because when he says “we” he really means “you”, you idiots.

Which is, weirdly, similar to the name a mysterious hacker puts on a business-destroying virus later in the episode and also, coincidentally, the new Irish Times ad-slogan.

Suspected spoiler alert...
It turns out that Elliot is only imagining that he’s telling his therapist all this. This makes sense, for as we know Elliot really only talks to his dead father and the internet pornographer in the opening scene.

Elliot’s cosy outsider’s misanthropy is disrupted by an encounter on a train with Christian Slater, aka Mr Robot, whose ambitious political rhetoric and techno-anarchism sound suspiciously like an amped-up version of Elliot’s own bolloxology and who is also responsible for the curiously named virus I mentioned a few paragraphs back.

Before long, Elliot is connected to an improbable plot to bring down the whole economic system (or at least Evil Corp) with the power of computering, political pseudoscience and loquacious self-righteousness.

Now, there’s probably more to it and... spoiler alert... I also suspect that the already delusional Elliot is “Fight-Clubbing”* Mr Robot into existence.

This is based partly on the fact that: no one else talks to Mr Robot; he invites Elliot to join a secret club which he must not talk about; he performs an inexplicable act of biographically-significant violence (in episode two); and also, I believe Christian Slater to be imaginary anyway (your parents were buying the presents all along).

While we are it, here are some other television programme related neologisms. House-of-Cardsing: when you plot against co-workers out loud in their presence. Game-of-Thronesing: when you explain complicated plot points while in the nip. Magnum PIing: when you don shorts, grow a moustache and solve crime with your friend Higgins.)

Hit by lightning
Do I like Mr Robot? Well, I like half-arsed and humourless counter-cultural politics; I like references to late capitalism, conspicuous consumption and internet dystopianism; I like hoodies; I even like Hackers starring Johnny Lee Miller. But no, I do not like Mr Robot. It’s complicated without being complex and it’s silly without being good-humoured.

Similarly, in Mr Robot, I wonder if we’re meant to see Elliot as a beleaguered genius, wise beyond his years, or as a self-satisfied comment section hit by lightning and come to life. Sadly, I think Elliot is intended to be the former but he comes across like the latter. He is dumber than he thinks he is, so Mr Robot is also dumber than it thinks it is. Also, there are no robots in it. A show called Mr Robot should have a robot in it.

Meanwhile, bike-riding children
Stranger Things (Netflix) does not have a robot in it, but it does have plucky bike-riding children, a John Carpenter-style synth soundtrack, government experiments, the year 1983, a weeping Winona Ryder, a strange girl with mysterious powers, under-valued sad-eyed character actor David Harbour, an eerie alternative dimension, Matthew Modine with white hair and a terrifying monster.

It blends the best of Spielberg and Stephen King. It’s ET meets It (ETIT, if you like, which sounds like a corporation on Mr Robot), but it’s not pastiche. It takes its subject matter seriously, grounding its satisfying sci-fi concepts in friendship, bereavement, childhood innocence, adult sadness and abject terror. I really like it.