‘To my surprise, hip-hop works well with Irish dance choreography,’ the 20-year-old says 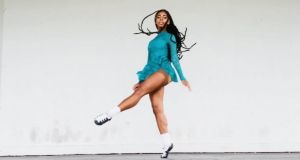 Morgan Bullock: ‘Dance takes my mind off the craziness of the world’

I created my TikTok account shortly before the pandemic. I first heard about it from some of the younger kids at my dance school. They were doing all these viral dances with choppy choreography, so I gave it a go.

I was terrible! I tried to learn the routine to Savage, a song by Megan Thee Stallion and Beyoncé, but I couldn’t move fluidly. So I tried Irish dancing to it, instead, doing the tricky footwork like rocks and toe-stands, trebles, drums.

To my surprise, hip-hop works well with Irish dance choreography: you can tap out the beats with your shoes. I posted a video in the evening; at about 3am, I woke up and there were thousands of comments in everything from Russian to Chinese, and so many from people in Ireland. When the Irish author Emma Dabiri posted it on Twitter, even more flocked to my page.

I started getting Facebook friend requests from older Irish people saying how much joy it gives them to see me dance, and that my mum must be so proud – it’s very cute. The video has had more than 1 million views; even Beyoncé’s mum reposted it. In the space of a few days, I had been tweeted by the then taoiseach Leo Varadkar. He wrote: “Some brilliant moves there, we’d love to have you over,” and invited me to Ireland to dance on St Patrick’s Day.

I did an interview on Irish radio where they surprised me by having the director of Riverdance, Padraic Moyles, on the phone. He told me what I was doing was unique and asked me to take part in the touring show. I would definitely have gone to see it when it came to Virginia; now I’m going to be in it.

Since then, I’ve posted other TikToks of me dancing to tracks by Drake, Koffee, Doja Cat, Janet Jackson, and Michael Jackson. The comments have been mostly celebratory, but some people said that, as a black woman, I’m appropriating Irish culture.

I’m passionate about Irish dance, teaching and my identity as a young woman of colour, so the comments about “cultural appropriation” were quite hurtful. I feel like they’ve come from people who don’t understand the term.

Irish dance is like any other cultural art form, it was created to be shared. It’s a dance that was born out of oppression; we can’t lose sight of that. For me, as a little black girl, it was a beautiful art I was desperate to be a part of.

I was 10 when I first saw an Irish dancing recital, at the dance school where I was learning tap and ballet. I was mesmerised. My mum was a bit incredulous at first, but she let me give it a shot. I fell in love after my first class.

Now I’m 20, and Irish dancing is my life. Competitions aren’t that regular in Virginia, but until recently I was travelling every weekend to compete in major events elsewhere in the US, or international shows in Glasgow, Dublin and London. I came 43rd in the last world championships in 2019 – that might not sound huge, but getting into the top 50 is a big achievement.

I addressed the negative feedback in a post on social media by explaining that there are Irish dance schools all over the world. The supportive response was overwhelming and it felt like an educational moment.

People in the US tell me they want to pick it up and are searching for schools, and Irish people are looking for their heavy shoes from childhood. The most surreal moment was a black mother telling me she let her daughter sign up for Irish dance classes because she saw me. I didn’t have someone who looked like me to look up to in what is historically a very white space. That I can be that person for young black dancers is an honour.

Dance has been an outlet to take my mind off the craziness of the world. I teach my pre-kindergarten kids Irish dancing – they love the high kicks – and I’m pursuing my teaching certification.

My plan is to go back to competing; I just have to recover from some injuries. The Riverdance tour has been postponed for now, but when it comes to Virginia I’ll be there, dancing in the show. It will be a dream come true. – As told to Anna Cafolla (Guardian)