As ever, Sesame Street shows society how to be that bit more accepting, with a character modelled on her performer’s autistic son 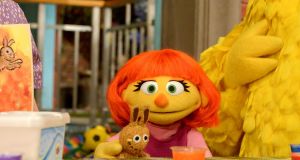 ‘See, Julia has autism,’ says Alan Marouka, the token human, ‘she likes it when people know that’

On first impression, there is nothing particularly unusual about Julia, the latest addition to Sesame Street. Against the fantastic reassurances of its vibrant neighbourhood – where playtime is always educational, the alphabet a crucial sponsor, and its Muppet residents are a reliable mixture of the informative and wildly idiosyncratic – her green eyes, flame-orange hair and familiar yellow fur barely stand out among Big Birds, Counts and Grouches. But as the long-running and groundbreaking US children’s series introduces its first autistic character to a worldwide audience, Julia’s differences are carefully unpacked and respected.

“See, Julia has autism,” says Alan Marouka, the token human, “she likes it when people know that.” When Julia, first introduced as a digital animation, made her physical debut this week in the US, only Big Bird didn’t seem to know. Surprised to find an unfamiliar four-year-old, painting beside Elmo and Abby with unwavering focus, who did not return his greeting, Big Bird is introduced to new patterns of behaviour to which the others are already breezily accustomed.

“She does things a little differently, in that Julia sort of way,” they explain.

That “Julia sort of way” is a subtle indication that the character is somewhere on the scale of autism, not a single encapsulation of a complex condition with many possible variations and expressions. Julia recoils from the mess of finger painting, for instance (“That’s why a paint brush works for you”), and creates instead an image of painstaking detail. She ignores Big Bird’s appeal for a tactile high five, expresses her contentment with an excited flapping of her hands and becomes greatly distressed by loud noise, retreating to a calming space with a reassuring toy.

Big Bird, long given to woeful rumination, takes it hard at first: does Julia dislike him, or is she just shy? But just as this enduring feathered figure has made it easier for tall, imaginative introverts to find their place in the world, Sesame Street – and a Sesame and Autism campaign – is paving the way for better representation of autism on screen and for a comfortable acceptance of autism in society. “Sometimes people with autism might do things that are confusing to you,” Big Bird is gently reminded. As Julia, whose behaviour is modelled on her performer’s autistic son, become a fixture of the show, that confusion may begin to lift much sooner.