As Stewart’s tenure as host ends, writers, producers and others look at his best moments 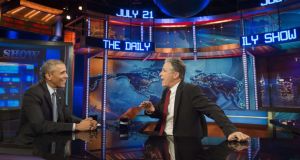 President Barack Obama on The Daily Show in July 2015. “I think we’ve done a very good job of making fun of Obama. It doesn’t get as much traction, because so many of the fans are left (leaning) and loved our (George W) Bush stuff,” said former executive producer and writer Rory Albanese. Photograph: Saul Loeb/AFP/Getty Images

The Daily Show began in 1996 as a snarky chat-show parody hosted by Craig Kilborn, a place of breezy celebrity interviews and human interest segments goofing on pet psychics. But after Jon Stewart took the chair in 1999, that Comedy Central show began transforming into something more substantial: a nightly comic dissection of current events, politics and the media that was required viewing for a certain centre-left segment of the population. As Stewart’s tenure comes to a close on Thursday, several Daily Show writers, producers and others look back on moments from his 16-year run.

Michael J Fox, first guest: I don’t remember much about the appearance aside from being a smart ass. I knew he was a smart, funny guy. But I had no idea the weight that he’d carry going down the line. I’ve watched the show religiously. It was the water cooler. He can have an opinion, but you always sensed an openness, like: “Convince me. Tell me I’m wrong. Show me where I’m not getting it. But I’m a smart guy and I think that I’m getting it, and I think that it smells.”

Rory Albanese, a former executive producer and writer of The Daily Show; showrunner of The Nightly Show With Larry Wilmore: It was my third day, and they were doing a summer spectacular shoot on the roof. Steve and Stephen were in a kiddie pool just goofing around together, and I remember thinking: “I can’t believe these two guys are on this show. How are these two guys not the most famous comedians on TV?”

Rory Albanese: That’s what put The Daily Show on the map. People didn’t know how to process what was happening. What the hell are hanging chads? The whole thing was so crazy. It was just perfect for satire. Jon found his rhythm in that moment. You could tell he had a lot to say, and a lot of opinions.

Allison Silverman, former writer, The Daily Show; former head writer of The Colbert Report: There were magical elements of bureaucracy that definitely lent themselves to humour. I remember listening to the supreme court argue (Bush v. Gore) and wishing we had footage, and then deciding we would create our own footage and voices for the supreme court.

It’s not so much that Crossfire is bad, but “It’s hurting America”, he told the hosts. “Stop hurting America.” Several months later, CNN announced it was cancelling the show. The Crossfire incident solidified Stewart’s status as cable news’s most prominent critic.

Paul Begala: I believe he clearly came in there wanting to blow the show up. And he did so. He was very nervous in the makeup room. That was my first inkling that there was something going on. I went to meet him, because I’m a big fan. Also my cousin was in the army and Jon’s done a lot to entertain the troops. He never brags about it, never takes credit, never promotes it. He’s not Bob Hope. So I wanted to tell him, “My cousin is in the army and I wanted to thank you.”

Rory Albanese: He will get questions about Crossfire. “Is Tucker Carlson still mad at you?” My answer is, “Yes, probably, he is still mad.” He probably has a room in his house with a lot of Jon Stewart pictures with arrows through them.

Albanese: There’s always that feeling people have about The Daily Show, that its mission is to drive some left-wing narrative, and it’s not. The goal of the show is to create a funny comedy show every night. I think we’ve done a very good job of making fun of Obama. It doesn’t get as much traction, because so many of the fans are left (leaning) and loved our (George W) Bush stuff.

David Axelrod, political consultant and former senior adviser to Obama: We were right on the verge of a really tough election. Part of the motivation was we wanted to galvanise the vote. The bully pulpit is something you have to assemble in the 21st century. It’s not there waiting for you. And you have to assemble it by putting many different pieces together. The Daily Show was one of those pieces, certainly for us. Jon Stewart, as a social satirist, is one of the incomparable talents of our time, but it was the audience who was important for us. – (New York Times service)