Radio review: RTÉ and Newstalk reports get across the full horror without histrionics 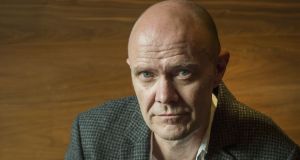 'Seán Moncrieff reminded his audience that, as well as being a wry chronicler of contemporary foibles, he can handle hard news topics.' Photograph: Brenda Fitzsimons

Tuning into Morning Ireland (RTÉ Radio 1, weekdays) always requires a certain degree of compartmentalisation. The chances of getting oneself out the door in time for work or school would be stymied if one stopped to ponder the customary cascade of depressing news, particularly when it’s relayed by the doleful voice of Cathal Mac Coille.

On Tuesday morning, however, the usual emotional distance is shattered as the story of the Manchester terrorist attack emerges in all its horror. When co-anchor Audrey Carville reports that “police say children are among the dead”, the sickening enormity of the atrocity the night before hits home. By the time the presenters hear accounts of injuries caused by bolts from the bomb, it’s hard to know whether to weep or vomit.

Carville and Mac Coille keep a composed tone, even as they hear eyewitness accounts of the bombing and read out heartbreaking tweets from worried relatives. If anything, the duo’s calm demeanour, even if strained at times, underlines the grimness of the event. Rather than fulminating in rage – which would be understandable – the presenters lay out the facts of the story, however dreadful. Simply by reporting on this mass murder committed at a pop concert for children and teenagers, they draw attention to the unspeakable moral void behind the crime far more effectively than if they sucked the air out of the room with voluble apoplexy.

Meanwhile, the immediacy of the human voice brings an emotional dimension to the radio coverage that is perhaps lacking in the more visceral visuals of television news. John Murray, guest host on Today with Sean O’Rourke (RTÉ Radio 1, weekdays), checks in with reporter Fiona Mitchell for updates from Manchester, only to be greeted by a slightly breathless voice.

“If it sounds like I’m on the move, it’s because I am,” Mitchell tells Murray. As she explains how the police have just ordered people in the city centre to “get out now”, Mitchell maintains admirably poised. Not only does she pass on the latest developments in the story, but she even puts the attack in historical context by recalling the IRA’s 1996 bombing of the city. The evacuation thankfully doesn’t presage a more serious incident, but Mitchell’s report adds to the febrile atmosphere, palpable even from across the Irish Sea.

When Singh talks of seeing someone with an arm blown off, even the unflappable Moncrieff blasphemes in horror

Seán Moncrieff (Newstalk, weekdays) plucks the closest thing to a good news story from the whole tragic day, though it’s still an appalling tale. He talks to AJ Singh, a Manchester taxi driver who offered his services for free throughout the night to the many people left stranded without transport or money.

Moncrieff’s guest paints a picture of chaos and fear in the aftermath of the bombing, repeatedly describing it as “a nightmare”. When Singh talks of seeing someone with an arm blown off, even the unflappable Moncrieff blasphemes in horror. Unsurprisingly, the experience has taken its toll. “Talking to you now I’m shaking,” Singh tells the host.

Moncrieff, in turn, seems worried that his guest should even be on air, so dazed does he sound. “You’ve witnessed some harrowing scenes, go easy on yourself,” he suggests. The rawness of Singh’s testimony is more striking than his broad factual strokes, but his selfless actions speak louder than his words.

Having reminded his audience that he can handle hard news topics, the next day has Moncrieff resuming his usual role as wry chronicler of contemporary foibles. He speaks to Brad Vezmar, a Texas resident who is suing a woman he dated for the price of a cinema ticket. Vezmar explains how he was annoyed by his date’s “egregious” behaviour of texting during the film; when he asked her to go outside, she left and didn’t return.

Vezmar’s irritation may be justified, but as Moncrieff suggests, it hardly merits legal action. His guest disagrees, explaining how he was so offended that he decided “to take an action that alleviates my angst”. Even as Vezmar stresses the humorous element to his lawsuit, it’s unclear from his earnest tone – “I didn’t stand up to be a hero,” he says, with apparent sincerity – whether he is a post-ironic japester or merely a wheedling millennial snowflake of popular stereotype. Either way, it’s a welcome distraction from more serious matters, as Moncrieff’s archly amused manner attests.

Amid the pain of Tuesday, News at One (RTÉ Radio 1, weekdays) features a voice of unrestrained, almost unseemly joy. It belongs to Seán FitzPatrick, the former chairman of Anglo Irish Bank, after his acquittal on charges of misleading auditors over multimillion euro loans made to him by the bank.

“It’s a wonderful day for me and my family,” Fitzpatrick tells reporters, before asking for his privacy to be respected. Given that the reckless lending of Anglo-Irish Bank led directly to the catastrophic crash of 2008, one might expect a bit less euphoria from its guiding force, let alone on a day when others are consumed with sorrow at gut-wrenching events elsewhere.

If that’s hard to stomach, the indignation rises to critical levels on the next day’s programme, when business editor David Murphy analyses why the case failed. He says that the department responsible for pursing the case “failed at a key point in Ireland’s history” by not investigating it to a properly high standard, partly due to a lack of resources. But Murphy stresses another key issue. “When you take on wealthy individuals in society, it’s clear you can face multiple court challenges.” Try compartmentalising your anger after that.

Even before Morning Ireland carries the full news of the Manchester attack, there has been an ominous harbinger of the terrible details to come on Rising Time (RTÉ Radio 1, weekdays). As casualty figures filter through, a sombre Shay Byrne talks to sports correspondent Darren Frehill, who tells how at the weekend he had brought his two young daughters to the Dublin concert by Ariana Grande, the singer whose show was attacked in Manchester. It’s a jolting reminder of the proximity of such violence, not to mention its randomness.