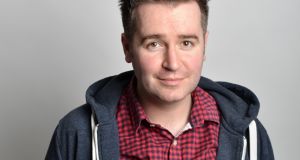 Jarlath Regan: his kidney donation episode, in which he discusses the realities of organ donation, is stunning

It’s 2017 and we are long past the sunset of Irish pirate radio’s boom: but instead of carrying on in silence, we’ve stumbled upon a new dawn. As a form, the podcast is an infinitely more permissive thing than traditional radio broadcasting, and the internet doesn’t have restrictive regulation the way the airwaves do.

I feel as passionate about podcasting as I did as a teenager staying up late and tuning in to stations now long disbanded, headphones in, eyes wide. Podcasting allows chat radio on its own terms, and within that is room for sparkling and rare human moments.

While we will always listen to the radio here in Ireland, and many of our hosts have become iconic in their invisible but endlessly listenable presence in homes and cars all across the country, there are scrappy recording studios and hosts all over the country putting together shows of their own.

Podcasting in Ireland is a new and growing community, one that I’ve been involved in for some time: I co-host Juvenalia with Alan Maguire and Ellen Tannam, interviewing guests about childhood obsessions and inspirations, and add a voice to Ireland’s only fiction podcast, a series of horror stories set in a not-so-fictitious Irish town, written by Graham Tugwell. As a devout listener, I know podcasting is a terrific outlet for expression and holds potential for great community. The form is in its infancy in Ireland, so there’s never been a better time to tune in – or start talking. So pick up your earbuds, or pick up your mic, and get going.

The Alison Spittle Show
Each hour-long segment is an interview with a person of note, and Spittle’s hosting is warm and hilarious. Some episodes of the show are recorded in front of an audience in Dublin’s The Workmans Club, others in the intimacy of the Headstuff Studios. The most recent episode, an interview with disability activist Sinead Burke, is a great gateway as is the live episode featuring Louise O’Neill. Mattress Mick and George Hook have also had the chats with Alison – proving each episode truly unique and interesting. You’ll want to be in the room with them. headstuff.org

An Irishman Abroad
Jarlath Regan’s longform interview series is well known in the mainstream, and has certainly earned it’s place as one of the most listened-to Irish podcasts. Regan is a careful and genuinely interested interviewer, allowing each conversation tip between the personal and the political with ease. The kidney donation episode, in which Regan discusses the realities of organ donation, is a stunning piece of documentary, both intimate and educational. soundcloud.com/an-irishman-abroad

Our Sexual History
Shauna Scott, the proprietor of Sex Siopa, brings sex ed directly to your earbuds. Each episode focuses on a different aspect of sexuality throughout history, which in many ways impacts how we have sex today, too. It’s an anti-stereotype, educational show and Shauna leads conversations with a wide range of historical experts. The episode about Irish mythology is terrific – comedian Teresa Coyne uses her experience as a tour guide at the National leprechaun museum to shine a light on the scandalous and often violent sex lives of some of our ancient heroes. headstuff.org

Weekly General Meeting
The WGM is a live variety show hosted and produced by humorist and writer of the Diet of Worms Shane Langan and Nial Conlan of Delorentos. Each live show is sliced and diced and presented via podcast and covering a huge range of guests and subjects. Their lineup is occasionally star-studded – Domhnall Gleeson and Hozier, for example, appear in recordings made just before their respective rises to astronomical celebrity. A mix of literary readings and music and conversation, it’s the ideal radio variety hour.
theweeklygm.com

Stoneface Films Podcast
Recommending comedy is always a challenge as everyone’s tastes vary so widely in terms of what they find funny, but you’re in excellent hands with hosts Davey Reilly, John Hozier-Byrne and Rob O’Sullivan. They have a natural ease with one another that allows for great spontaneity – each episode features questions from Twitter answered by the hosts and their guests. Slightly risky to listen to on the bus as you risk cracking up in public. sentinelaudio.com

Maeve in America
Maeve Higgins, having recently migrated to the US, takes a highly relevant stance on immigration during a frightening and turbulent time in American politics. Irish people have a long history of emigration to the continent, but Higgins delves further than just these narratives and talks to immigrants from all over. Here she holds space with warmth and curiosity. She talks to emigrants about their experiences with massive empathy and humour. She’s the perfect guide to the US that Trump wants gone. This is an important piece of cultural documentary for the world we live in. Have a listen to the Thanksgiving episode – then all the others. maeveinamerica.com

Fair Game
The radio airwaves are inundated with sports coverage, and there are enough football and MMA podcasts out of Ireland to shake a stick at, but Fair Game brings something important and unique to the conversation: it’s a podcast about Irish women in sport. Elaine Buckley and Emily Glen talk to Olympians and national rugby heroes about their lives on the pitch and off. This is a vital angle on a subject our nation holds great pride in, and Buckley and Glen make passionate hosts. castaway.media

The Irish Pubcast
Wayne Talbot, Darren Fahey and Ciaran Marcantonio walk into a pub – well, a booth – with a microphone to talk video games and movies. There’s the gentle clink and pour of drinks in the background and the chat is niche but very funny and very natural, ranging from weekly television releases, comic-book franchise news and video games. There’s little to no coverage of this kind of culture in mainstream media, so nerds be salved. This is the table you want to hang out at. They’re even producing a live show at the Grand Social on March 14th. Aficionados should give the Pokémon 20th anniversary episode a listen for a proper nostalgia rush. pubcast.geekplanetonline.com

And to access the complete range of Irish Times podcasts, from World View, Inside Politics and the Women's Podcast to Inside Story, Inside Business and Roisin Meets, go to irishtimes.com/podcasts.

A ‘really subversive idea’: Most people are pretty decent
6

What Courtney Love did straight after she left 1980s Dublin
9

The Irish photographer who won a Pulitzer, then quit ‘the best job in the world’
Real news has value SUBSCRIBE