House of Cards season four gets ready for a cabinet reshuffle 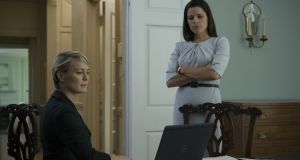 If we thought election fever would wane now our votes have been cast, think again. For in the midst of the Dáil changeover, and America’s bizarre presidential race, there’s another run of electioneering going on this week – namely in House of Cards. And this work of fiction is only slightly less fantastical than the Republican candidacy.

In each of its three seasons, the Netflix show gave cause for traditional media to stand up, take notice, and panic slightly. Starting as it meant to go on, the first saw main actors Kevin Spacey (Frank Underwood) and Robin Wright (Claire Underwood) lead House of Cards’ nine Emmy nominations; the second season was one of the first to be released in 4K or ultra high-definition; while the third proved to be Netflix’s most binge-watched show last year.

As if this season’s high drama wasn’t enough to continue the momentum, there’s new blood in the form of Neve Campbell. Best known for Scream but now swapping Ghostface for someone even more fearful, she plays Claire Underwood’s campaign manager Leann Harvey, as Claire continues to fight for a political career outside of her husband’s shadows.

“I was already a fan of the show, so I was excited at the prospect of joining the cast,” says Campbell. “And I admired the actors too; I was a fan of Robin Wright from the start of her career, and I worked with Kevin Spacey in The Old Vic.”

Spoiler-free zone
In the room in London where we’re talking, there’s a PR hovering in the background to ensure no spoilers emerge, so erring on the side of caution, she explains what she can about her character.

“What I’m allowed to say about Leann is that she’s a Texas businesswoman. She’s ambitious, wilful and determined.”

She’s earlier in her career than the others, “which adds to the hunger. She was a very fun character to play, because people don’t see me in that light – or they haven’t seen me in that light. Playing a strong woman is rare – especially in film, where most women are portrayed as very vulnerable, victims in some way, or they don’t have much history at all.

“But in this format you can have an arc that lasts five years, and it allows audiences to become enraptured in a character’s process.”

For Canadian-born Campbell, Leann is a departure. Her wide-eyed, youthful image – which hasn’t diminished at 42 – has led her to numerous roles as the sweet girl thrown into some fraught situations, whether that’s being orphaned (Party of Five), the object of a hitman’s affection (Panic), or being chased by a masked murderer (Scream). But in a season that brings its long-standing theme of gender power dynamics to the surface, it’s Leann that helps to shape these fraught situations.

“She’s unapologetically strong,” says Campbell. “She and Claire are similar in many ways; they’re women in a world of men, so they’ve had to be ruthless in order to get where they should be in politics.”


Parallels with reality
Indeed, while Barack Obama assured us that the real White House is far less cut-throat than the version in House of Cards (“I wish things were that ruthlessly efficient”), the cast she joins is of single-minded characters who would throw you under a bus quicker than you could say Machiavellian. And Leann fits right in, which is how she earned the nickname “Lady Stamper” according to Michael Kelly, who plays Doug Stamper, the fiercely loyal right-hand man of Frank Underwood. “That’s what I called her when she began on set,” laughs Kelly. “We’ve become great friends; I think the world of Neve.”

Stamper’s story picks up soon after the end of series three, when he killed Rachel to break the trail that could expose his boss. His laboured decision was a yell-at-the-screen moment, especially as he initially found the heart to let her go.

“I got so much abuse for it, mostly from internet haters, but I find that just funny,” says Kelly. “For the most part people understand why Doug had to kill her and if the third series was about Doug getting back to where he belonged, he had to.

“Last season he saw another way of life that he could have – a family life, and a relationship with his physical therapist. For him, he was behaving normally, but ultimately went back to what makes him tick: that addiction to the job and to Frank.”


Stamper in chief
So we find Stamper back as chief of staff, as some of the most dramatic storylines yet unfurl for the US president, in the midst of a cold war between himself and Claire, never mind Russia. “Claire walking out at the end of season three had been boiling for some time, but at the beginning of season four, it’s pretty crazy, even for our show, to have them go like that against one another,” Kelly says, perhaps revealing too much. “I found it so exciting. There’s a different layer to the show this season.”

A fifth season is already in the pipeline, though showrunner Beau Willimon is stepping down, with Melissa James Gibson and Frank Pugliese promoted from within the team to take his place.

Does Kelly envisage the show as one that keeps rolling on, or, like the original BBC series, is it best left with a succinct legacy? “I think it is finite, I just don’t know how long they’re thinking,” he says. “I think there’ll come a time where the story is told. I don’t think you’ll see Frank going against history and seeking a third term. If I had to guess, I’d say six seems logical.

“A lot of people speculated the fourth was the last season, because there would be 52 episodes, and there’s 52 cards in a deck. That would have been clever – but I don’t think anyone is complaining about the fifth series.” House of Cards season four is available to stream on Netflix from Friday, March 4th

Bored at home? How about becoming a classic movie character?
7