Game of Thrones: everything you need to know before watching season six

The wildly popular fantasy series returns on Monday. Here’s the story so far

Whet your appetite for season six of hit television show Game of Thrones with the latest teaser trailer. Video: HBO 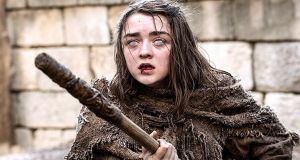 Game of Thrones is back on April 25th (2am and again at 9pm on Sky Atlantic), with episode one of season six. So what’s the state of play in the seven kingdoms, and did we learn anything from the season trailers?

Perhaps drawing the worst hand by the end of season five is Stannis Baratheon (Stephen Dillane). Having killed Shireen (Kerry Ingram) to appease the Lord of Light on the advice of Melisandre (Carice van Houten), he then lost his wife Selyse (Tara Fitzgerald) to suicide, before finding out that Melisandre had legged it for Castle Black. Half his men have deserted; it’s hard to inspire an army when you are guilty of filicide.

After marching on Winterfell, Ramsay Bolton’s forces marched out to meet and slaughter him. Brienne of Tarth (Gwendoline Christie), who was staking out Winterfell looking to rescue Sansa (Sophie Turner), finished the job, hacking him to death for killing his brother.

Sansa, having failed to get sprung by Brienne, jumped the ramparts with Theon/Reek (Alfie Allen). But not before Theon went someway towards atonement, by helping her to escape and killing Myranda (Charlotte Hope) in the process.

The end of the world
Meanwhile at Castle Black, Jon Snow (Kit Harrington) allowed Samwell (John Bradley-West) to leave with Gilly (Hannah Murray) and child to train to become a maester.

“I’m glad the end of the world is working out for someone,” Snow tells him. It’s certainly not working out for Snow. No sooner than Sam is off, Melisandre shows up (never a good sign) and that night, the Night’s Watch murder Snow for betraying the order. One by one they take it in turns to pull a Julius Caesar on him, and not even Davos (Liam Cunningham) can save him.

Or can he? The big talking point is if Snow will rise from the dead. Given that: it’s already happened with other characters; a fairly handy witch is in the gaff; and walking dead people are a main arc of the show, we say yes, expect to see an undead shuffly Jon Snow stumbling about with his lovely big dog Ghost (who is still alive, but will be confusingly named should these things come to pass).

Jaime Lannister (Nikolaj Coster-Waldau) is on the way home from Dorne with Myrcella (Nell Tiger Free). But as soon as he tells her about their strange family set-up, she collapses, having been poisoned by Ellaria (Indira Varma).

Over in Braavos, Arya (Maisie Williams) murders Ser Meryn Trant (Ian Beattie) before returning to the House of Black and White. Jaqen (Tom Wlaschiha) kills himself to balance out the life Arya took, before appearing as someone else. There’s a good bit of guff about how Jaqen never existed, but before the existentialism gets too tedious, Arya is struck blind.

City in chaos
Over in Meereen, the city is in chaos. Tyrion (Peter Dinklage), Missandei (Nathalie Emmanuel) and Grey Worm (Jacob Anderson) are left to run the city, with help from Varys (Conleth Hill). Meanwhile, Daario (Michiel Huisman) and Jorah (Iain Glen) set out to find Daenerys (Emilia Clarke), with Jorah covering up his growing grayscale issues.

Daenerys (Emilia Clarke) has fecked off on one of her scaly children (unimaginatively called Drogon) to what looks like the Dothraki lands, where she bumps into a party of them while Drogon licks his wounds.

And back at King’s Landing, things take quite the brutal turn for Cersei (Lena Headey), when Game of Thrones continues its consistent policy of depicting violence against women. After confessing to adultery with her cousin Lancel – but denying having sexual relations with her bro – Cersei returns to the Red Keep ahead of her trial. The High Sparrow (Jonathan Pryce), though, has her stripped and shorn, and marched through the streets to atone, while the crowd hurls abuse and pelts her.

Trailer hints
After she returns, she finds that Qyburn (Anton Lesser) has done a decent bit of transfer business in the off season, and hired Gregor “The Mountain” Clegane (Hafþór Júlíus Björnsson) as her new bodyguard, complete with vow of silence, and recovered from his wounds after duelling with Oberyn Martell (Pedro Pascal). Here is where the trailer starts to drop a few hints.

Unsurprisingly, Cersei is on the warpath, and Jaime will have a point to prove with competition from the Mountain, so things look bad for the cult occupying the Sept of Baelor – where, incidentally, Margaery (Natalie Dormer) is still imprisoned.

And what of Petyr Baelish (Aidan Gillen) and his hilarious accent? When last we saw him, he was heading up to Winterfell with the knights of the Vale to deal with whatever was left of Bolton v Baratheon and make himself warden of the north.

And where are the wandering children, last seen tripping balls under a magic tree? They were attacked by a group of the undead before hiding in a cave and meeting the Three-Eyed Raven (Max von Sydow in season six). And you may have spotted a now much older Bran is in the trailer, standing with the undead army.

Got that all? Good.