Shortly after the Civil War the Free State government began regularising some of the activities during the War of Independence, including the Republican Courts, amid hints that some of them had got out of line 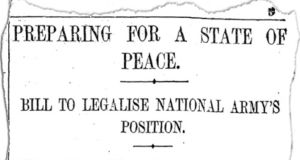 The House then took the second stage of the Dail Eireann Courts (Winding-up) Bill.

Mr. Kevin O’Higgins [minister for home affairs] said that this was a belated bill. These Courts had been disbanded and disestablished by the Executive Council and the Provisional Government nearly twelve months ago, and that there was hardship to litigants in these Courts, or who had cases pending, by reason of the bill not having been introduced sooner might be the subject of criticism. That was due to the times through which they had passed, and to the delay in compiling the necessary data for the winding-up of these Courts.

They had throughout the country an improvised system of justice, which was forged as a weapon against British administration in an exceptional time and exceptional circumstances. They had Parish Courts, District Courts, Circuit Courts, and a Supreme Court. None of these Courts, however, had been given jurisdiction to deal with licensing matters. That was explicitly withheld. The Courts that acted during the truce period were not as careful and as pure in their administration as they were in their first youth. These Courts had no jurisdiction in licensing matters, and in giving certificates to publicans they acted ultra vires.

The Committee set up in October last had difficulty in getting data because a number of clerks adopted a hostile attitude towards the Government, and it had not been possible to get complete returns.

In February last the Government issued notices in the Press inviting persons who had cases in these courts, and who had cases listed, to furnish details, with a view to having their decrees registered. About 10,000 forms were applied for by solicitors, and of these about one-third were returned filled and verified. District registrars and parish clerks had been asked to lodge final accounts, and, excluding the six counties, about one-half of the District Court registrars and one-quarter of the parish clerks had sent returns.

He felt that there would be very little objection to the bill, and that the principal thing which could be objected to was that it had been delayed so long.

Mr. [George] Gavan Duffy deprecated the abolition of the courts. He dissented thoroughly from the view that they had anything to be ashamed of in the Dail Courts, and he dissented from the view that they ought to be buried. He was sorry to hear what the Minister had said about the men who ran the courts, at great difficulty, for the Government of the day, and at great risk to themselves and their business. It was extraordinary the ability and skill with which these men, unversed in legal matters, throughout the country managed these tribunals, and was a great tribute to the common-sense of the people.

Pointing out that persons against whom judgements had been given by the English Courts and who had not defended the actions, were not provided for in the bill, Mr. Gavan Duffy contended that a grave injustice had been done to them.

Mr. O’Higgins said he did not agree with Deputy Gavan Duffy that the abolition of the Dail courts was unwise or unnecessary. His view was that the unwisdom lay in delaying the abolition too long, and allowing the commercial interests of the country to be plunged for months into the chaos created by the dual jurisdiction. The Dail courts were of their nature provisional.

Mr. O’Higgins said that there was no emphatic or definite prohibition issued against going into the British courts. The Dail courts were provided for the people who were unwilling to give recognition to the British system.

Dealing with the question of persons who did not appear in British courts, and allowed decrees to go against them, and the view that such persons ought to be allowed to appeal to the Commission, he said that he had an open mind on the matter, but such provision might bring to the surface all kinds of bogus cases.