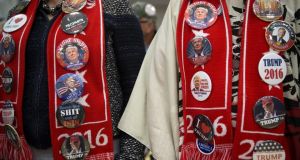 Planet of the Trumps: lots of his supporters believe that if the Donald is elected president we foreigners will think more highly of the US. Photograph: Aaron P Bernstein/Getty

I am in the United States. Having been here a few days, I can answer any questions about the nation’s discontents with comprehensive rigour. Ask me about her foreign policy. Ask me what needs to be done about urban crime. Perhaps you’re American yourself. I’m sure you’d welcome my suggestions for improvements in your country’s transport infrastructure.

Of course you wouldn’t. There is nothing more irritating than the foreigner who, on the basis of three newspaper articles and a weekend at a popular resort, pontificates windily on the country you call home. I offer you, as evidence, those Americans who, in the bad old days, loved telling us how great the IRA was. Give me some of this money you claim Americans are always giving us or shut your trap, pal.

Why did I start this? Oh yes. There is one issue concerning the United States on which we are better qualified to pontificate than those who actually live there. This week yet more “ordinary people” turned up on television to explain why they want Donald Trump to be president.

You know how this goes. Rather than be in the pocket of sinister corporate donors, he is his own sinister corporate donor and operates within his own very deep pocket. (My words.) He’s not a politician. He has a proven ability to make a small fortune out of a large one. The next time the orang-utans attack he will be able to negotiate with them in their own language.

One line of argument keeps cropping up. Vox-popped Trump supporters suggest that, in the Obama era, the US has lost the world’s respect. The phrase “laughing stock” crops up again and again. Trump used those words himself in an interview last year.

Planet of the Trumps swells with beings who believe that if the Donald is elected president we foreigners will think more highly of the nation. As fantastic high concepts go, this rates with that science-fiction film in which ambulatory lavatory brushes take over Ontario. (I may have made this up.)

Obama probably did lose some “respect” as a result of his pussyfooting over Syria, but in most countries that is more than compensated for by his efforts to present a more tolerant face to the world.

This week’s tentative move towards closing Guantánamo Bay will add to that impression. Some on the American right will see the gesture as a sign of weakness. In the wider world it will increase the levels of “respect” in which he is held.

This is not the first time Americans have jumped to unstable conclusions about the world’s opinion of their leaders. It remains an unshakable dictum of US politics, treasured almost as much on the left as on the right, that Jimmy Carter made the United States a laughing stock.

I lived in the country during the last months of the Reagan presidency and was repeatedly told that, even if you disagreed with that president’s policy, you had to admit that he restored the United States’ respect in the world. It was axiomatic.

This was simply not the case. During the Iran hostage crisis Carter was, in western Europe, portrayed as a decent man struggling with an almost insurmountable obstacle. A few years later Reagan was often represented as a preposterous figure – an inarticulate hack actor addicted to sentimental homily – whose election brought no credit to an otherwise great nation.

The current situation is much more stark. It is not just leftists who regard Trump as a dangerous buffoon. In the UK both David Cameron and Boris Johnson have spoken out against him. On a recent edition of the BBC’s Question Time Nigel Dodds, a man rarely confused with a tree-hugging hippy, expressed concern at Trump’s possible elevation to president.

I suppose we are afraid of a Trump presidency. But it’s not like the fear Prussia felt when Napoleon began marshalling its armies. It’s more like the fear you might feel upon learning that an orang-utan was piloting your plane. Of course, it’s none of our business, TrumpLand, but this really is what the rest of the planet feels.

‘Hello, I hear there’s someone in the house acting the b*ll*cks’

Steve Martin and Martin Short: ‘I have about 800 cousins coming to the Dublin show’
7

There once was a girl who seduced her sister’s huband, and he hanged himself
9