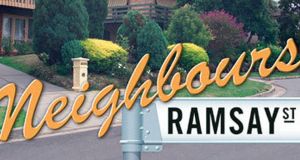 Events on Ramsay Street, home to Australian TV series Neighbours, have been chronicled for 30 years. The show has been a launch pad for the careers of Kylie Minogue, Margot Robbie and Jason Donovan.

Try not to think about it too deeply.

We forgot, you never thought about it too deeply. That’s how the Australian soap has lasted, after all.

The naysayers (Neighsayers?) may scoff, but anyone who found themselves twiddling their thumbs before the six o’clock news/first can of the night/breakfast (delete as appropriate) over the last three decades is welcome to a party at Lassiter’s any time.

Those who turned their noses up at the flimsy wooden sets and plotlines can eat their words. Neighbours, first broadcast on March 18th, 1985, has now lasted for three decades and blasted many of its dramatis personae into the stratosphere.

It is worth noting that when Kate Winslet picked up a best actress Emmy for HBO drama Mildred Pearce in 2011, she said that one of the best things about the role had been the chance to play opposite “Mike from Neighbours”.

And to think Jane Harris (the badly-named beauty “plain Jane”) knocked Guy back for Des.

Winslet would never have done that. She had Mike’s poster stuck to her wall when she was 11, she said.

Other notable alumni are Kylie Minogue (naturally) and Jason “Dreamy” Donovan. Some 20 million people in the UK watched through a veil of tears when their wedding was broadcast in November 1988. “Especially for You” - indeed.

Alan Dale played family patriarch Jim Robinson for eight years. He went to Hollywwood - naturally - where he appeared in Ugly Betty, The OC, The West Wing and ER. In 24, Dale played the vice president. He had almost reached the top of the pile.

Harold Bishop, a personal favourite, was immortalised in a Little Britain sketch with Lou and Andy way before Professor Stephen Hawking got the same treatment this year. Who is the cleverest of them all, then?

Younger aficionados will know that The Hunger Games star Liam Hemsworth starred as paraplegic Josh from 2007-08. Liam’s brother Chris - aka Thor - played Jamie Kane in 2002; and older brother Luke played Nathan Tyson in 2001. The Hemsworths relly are are the best neighbours.

Seasoned Neighbour Margot Robbie played teen Donna Freedman for three years from from 2008. She was a bit of a challenge then, and she went of to do it again, this time with fewer clothes, when she took them off for her part in Martin Scorsese’s The Wolf of Wall Street, opposite Leonardo DiCaprio. Yes, that Leonardo DiCaprio.

And while the Australian soap was breeding Hollywood superstars, it was also incubating pop princesses.

Kylie (of course) was followed by Holly Valance. Valance had played Felicity “Flick” Scully from 1999.

Delta Goodrem, who was to get with and then get without our own popstrel Brian McFadden, appeared as aspiring singer Nina Tucker from 2002.

And let us not forget the very good-looking Natalie Imbruglia, who played simple country girl Beth Brennan for two years in the 1990s. Turned out she was Torn between a career in acting and music.

Madge. Harold. Des. Bouncer. Daily sunshine. Turns out that 30 years on, the world has a lot to thank the residents of Ramsay Street for.