Artists are in a unique position to make their voices heard – although, like the poet Maung Saungkha and the comedian Jan Böhmermann, they often pay a price 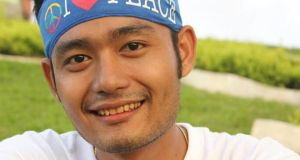 On trial: the poet Maung Saungkha is in court this week in Myanmar for a verse he posted online about having a tattoo of the president on his penis. He has spent six months in prison so far

Whether it was the church or the most influential family in Florence, moneyed patrons were always of interest to Michelangelo. But he also had a reputation as an artist who could not be easily bought.

Commissioned to sculpt grandiose tombs for some of the minor Medicis, Michelangelo took on a tricky subject. One of the statues was to immortalise Lorenzo de’ Medici, duke of Urbino and grandson of the charismatic Lorenzo il Magnifico, as a man of deep thought, carved in marble sitting cross-legged while cradling his chin in his hand: Il Pensieroso.

In reality Lorenzo was better known as an airhead, an ineffectual blowhard who died young from syphilis. Aware of the irony of the commission, and alive to posterity, Michelangelo finished the sculpture with a distinct plumed helmet, which looks faintly absurd in the context. It has been perched there ever since, as a knowing comment on Lorenzo’s true IQ.

That seems an elegant example of the way artists might chisel at the hand that feeds them. But what should they do to the hand that starves?

One quite enjoyable – and much less subtle – instance came recently in Here Comes the Night, Rosemary Jenkinson’s play for the Lyric, a comedy of commemoration that included a fictitious Northern Irish culture minister among its characters.

Jenkinson, who first appeared 10 years ago, has a well-earned reputation as a firebrand, and her new play, set in 1966 and 2016, spared nobody from lampoon. Still, to see a strutting, superficial, nationalist culture minister on stage, quick to quote Bobby Sands and slow to remember the correct author of Antigone, felt edgy enough to lacerate. (After swingeing budget cuts Northern Ireland’s actual outgoing culture minister, Carál Ní Chuilín, used some of the same words at an event a few months earlier.)

Jenkinson hardly bothered with a fig leaf. “When I was writing about my fictional minister of culture, arts and leisure, I was only too aware that the real one hardly ever comes to a show,” she wrote, describing both the resilience and the conservatism of theatre in times of adversity.

Jenkinson may even have been putting her faith to the test: the theatre, she wrote, was “the one place where you are able to say the truth as you see it”.

We cherish our belief that artists have not only the right to speak truth to power but also the obligation to do so. The alternative would be made-to-order flattery, hagiography or crude propaganda, none of which is easily confused with art.

But any romantic idea that artists and entertainers have some special dispensation to do this without consequence is not supported by history, however tolerant the cultures.

There’s a story that Queen Elizabeth I took one of her jesters to task for being too deferent, but there are infinitely more accounts of jesters being flogged, banished or executed for taking a joke too far. “They’ll have me whipp’d for speaking true, thou’lt have me whipp’d for lying, and sometimes I am whipp’d for holding my peace,” says the Fool in King Lear. Working conditions haven’t altered enormously.

This week the poet Maung Saungkha is on trial in Myanmar for a verse he posted online about having a tattoo of the president on his penis. (He has spent six months in prison so far.) In a cynical move of political expedience Germany recently kowtowed to the Turkish president, Recep Tayyip Erdogan, by allowing the comedian Jan Böhmermann to be prosecuted for a so-called defamatory poem about him.

Censorship is often imposed from outside, but its more corrosive form may come from within. “Telling a joke is more interesting when you can be put in jail for it,” a Hungarian satirist once said, and art under dictatorships has long taken energy from smuggling its real meanings into unobjectionable or inscrutable material.

But jokes tend to lose their bite when you become more worried about offending your paymasters, risking subsidy and not making rent.

Since the decision was made to fold the Irish arts department into a diluted portfolio of Regional Development, Rural Affairs, Arts and the Gaeltacht, headed by Heather Humphreys, there has been much discussion about how artists, arts workers and audiences should protest.

One long-brewing suggestion is for an artists’ strike. Another, more easily co-ordinated, is by signature, where an online petition to reverse the decision has sailed past 10,000 signatures.

The Irish Times writer Jim Carroll suggested, not entirely facetiously, that someone ought to write a play or a novel about it. This might be a productive use of whatever remains of the subsidy, and from a wryly sculpted hat to an outlandish caricature, there are many ways to leave a mark that lasts.