Waking the Feminists takes to the US stage

The theatre protest movement held two events in NYC, with organiser Lisa Tierney-Keogh saying its time to ‘kick the f**king door down’ 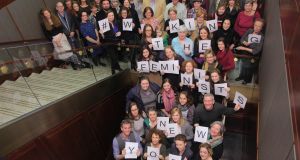 The Waking the Feminists symposium at Fordham University 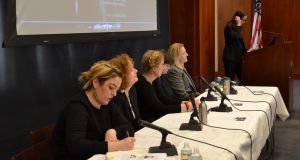 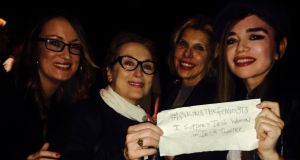 From left, Lisa Tierney-Keogh, Meryl Streep, Christine Baranski and Laoisa Sexton with their WTF message of support in Brooklyn in November 2015

The Waking the Feminists movement has spread its campaign to New York, with two events in the city this week.

On Sunday, a symposium on the protest movement took place at Fordham University in the Bronx and on Monday night, another rally was due to take place at the Irish Arts Centre (IAC) in Manhattan.

Dublin playwright Lisa Tierney-Keogh, who organised the IAC event, says she hopes to start several chapters in the US. Now Brooklyn-based, Tierney-Keogh found herself part of the Dublin movement’s social media swell in November, after she took a picture with the actors Meryl Streep, Christine Baranski and Laoisa Sexton holding a message of support for the campaign.

“There’s no going back,” Tierney-Keogh told attendees – a mix of academics and women working in the arts – at Fordham on Sunday. She urged them not to wait for change, but to “kick the f**king door down”.

Keri Walsh, an assistant professor of English at the prestigious, Irish-Catholic college, first planned the meeting when she heard about Waking The Feminists in December. Walsh already ran an Irish Women Writers Symposium to help overlooked authors.

Tierney-Keogh was on the Abbey’s New Playwrights programme, and comes from an Irish theatrical dynasty (her cousin is playwright Conor McPherson). Yet, getting her work staged there – or even in Irish theatres in the US – is another story. “As a girl, I had a less than 15 per cent chance of getting my work on stage in my own country’s national theatre.”

Jane Cox was a panellist at Sunday’s event. She left Dundrum at 18 to work as a lighting designer in New York. When nominated for a Tony award, Broadway’s highest honour, in 2014, she said she “discovered only one of 32 Broadway shows that season had a female designer”.

Another panellist, Maeve Higgins, said that even as she was often described as “Ireland’s top female comedian”, her male peers displayed a different level of wealth. “America’s not perfect but it’s bigger, more inclusive and it’s changing faster than Ireland,” she said.

Most of the ex-pats spoke of being stifled in Ireland, and said that Waking The Feminists had reignited their sense of Irishness. Actor Alison McKenna said, “Last November, I felt my umbilical cord pulling when I woke up in a New York apartment and tuned in to the Abbey via Periscope [an app that meant she could watch the WTF protest meeting in the Abbey].”

She stressed that “the problems are endemic”, and not specific to The Abbey, and she noted the movement’s success in getting bodies that control critical, public funding to commit to greater gender equity.

Princeton professor Clair Wills sounded a more sceptical note. “I feel we have been here before and not just once,” she said.

Aedin Moloney is the founder of Fallen Angle Theatre, which produces Irish and British women playwrights (her father is Paddy Moloney of The Chieftains). “In a way, I have been trying to Wake the Feminist for almost 16 years here in New York,” she said.

Laoisa Sexton, though also critically acclaimed, said she still struggles. Women need to be each other’s allies, she said, who was in the viral Streep photo with Tierney-Keogh. “It felt extremely important-a tiny thing but something we could do in New York to help.”