Women are from Norway, men are from Scotland in David Greig’s charming comedy with hints of something darker 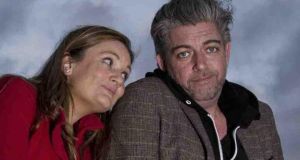 Gemma Doorly and Karl Shiels in Being Norwegian

He is nervous and unsettled, living alone in a new flat that grumbles with packing boxes. She is gracious and pretty as a picture. He has beer, whiskey and maybe some gin to offer. She would prefer wine. He is trying to put down roots. She has never felt rooted. So David Greig’s charming and bittersweet play begins, like a teasing will-they/won’t-they comedy, on the difference between the sexes, conducted in more earthly terms: women are from Norway, men are from Scotland.

Although Lisa (Gemma Doorly) and Seán (Karl Shiels) speak with generic Scottish accents in this co-production between Theatre Upstairs, the Cup Theatre Company and Bewley’s Cafe Theatre, Lisa claims a more distant connection. Brushing aside Seán’s polite scepticism, Lisa says she comes from Trondheim, “in a place called the Land of the Midnight Sun”. This might explain her dreamy daze.

They repair to Seán’s flat when the pub has closed. Their encounter has an endearing hesitancy, where Lisa is the pursuer and Seán the pursued. Shiels, not known for sexually timid performances, finds every beat of comedy in Seán’s evasions.

But these are not mere intimacy issues, and while Greig prolongs Seán’s shyness to the point it becomes absurd, then alarming, he also signals something disconcerting in both Lisa’s nationalist obsession and her ardour. Has Seán read Knut Hamsun, she asks? “You remind me of him.” In Norway, she says, “we’re used to darkness in people’s heads”.

In Doorly’s attractive performance, she gives the line reassuringly, but she and director Clodagh Mooney Duggan might have invoked more edginess; Lisa’s head, it becomes clear, is not radiant with Midnight Sun.

Greig guides this comedy towards something more poignant and then full of bright potential: two people who recognise and accept each other as outsiders. The production handles the transition well, muting the cliches of a difficult man with a dark secret and a determined, understanding woman to suggest instead that two unhappy people can strive to become someone else.