Education is a waste in Eugene Ionesco’s absurdist parable. What else can it teach us? 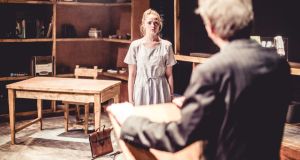 Lisa Walsh and Dan Reardon in ‘The Lesson’


What more can we learn from The Lesson ? Eugène Ionesco’s second play is a minor classic of the Theatre of the Absurd, neither as amusingly opaque as The Bald Soprano , nor as impassioned in its critique of power as his later, more conventional works.

In fact, on the page, The Lesson seems unsure of itself, as though Ionesco couldn’t decide how to proceed. A bright-eyed and eager young Pupil (Lisa Walsh) visits an initially timid Professor (Daniel Reardon), intent on gaining her “total doctorate”, with little more than partial knowledge of the seasons of the year and expansively memorised arithmetic. A merrily absurd pattern of tuition follows, in which the student can add but not subtract. “Integration alone is not enough,” the Professor demurs. “Disintegration is essential too. That’s what life is.”

That is also Ionesco’s main concern, and the Professor, his Maid (Camille Ross) and the Pupil illustrate a struggle for power and finally its shocking abuse. Director Zoe Ní Riordáin wisely strips out some of Ionesco’s more heavy-handed gestures: in the original, the Professor rapes and murders the Pupil before his mildly disapproving maid straps a swastika to his arm. Instead, Ní Riordáin focuses on a more general, cyclical power dynamic, nudged along with neat stage devices.

In Reardon’s arresting performance, for instance, we find a shy, shuffling dust-grey figure, like someone who had recently absconded from a Beckett play, who becomes a sprightly pedagogue, then a maniacal tyrant. As the Pupil, Walsh is more of a marionette of innocence and ambition, but the character becomes little more than the blood supply in a vampiric relationship.

Although Ionesco denies them an ounce of humanity, both Reardon and Walsh seem keen to restore some. One of the show’s pleasures is seeing Reardon’s eyes dancing as he traces some sort of logic behind various non-sequitu rs and it seems pointed that when Walsh is gagged, she can still be heard in domineering voice-over while her destruction registers as a convulsive solo dance.

One question Ní Riordáin doesn’t quite answer is that if her production is not to be a critique of totalitarianism or victimhood (both dead ends) and if it retreats from sexual content, what is its purpose? Colm McNally’s set, spare, clean and placeless, suggests something elegantly deferential, while occasional flashes of movement suggests something encouragingly weird.

The most curious aspect of this production is Ross’s performance, though, whose naturalistic delivery – she even takes a smoke break – is deliberately at odds with its guiding artificial style. When she is briefly glimpsed as a silent orchestrator of the action, it’s one of many intriguing ideas that don’t quite connect, as though it’s impossible to stage The Lesson without it feeling like an academic exercise.
Ends Saturday