The Wake: Performance and design as pure poetry 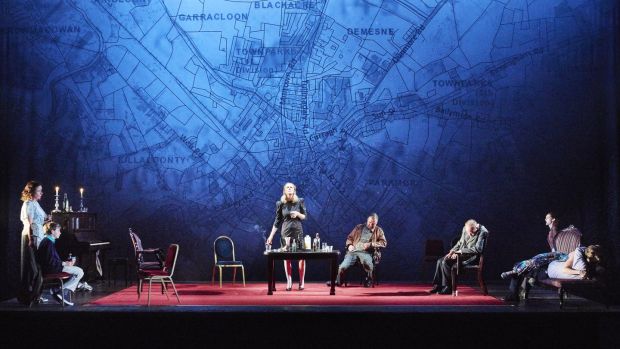 Mourning is painful, cathartic and perilous to avoid. It’s something at which Ireland has long excelled, in outpourings of emotion, song, whiskey: it’s good, grief. But when burial rituals are not observed, as Antigone angrily discovered long ago and Vera O’Toole finds again in Tom Murphy’s masterful 1998 play, spirits are disturbed, society becomes riven, and neither the living nor the dead will ever rest in peace.

Returning to Galway from New York, Aisling O’Sullivan’s long-exiled Vera learns that the grandmother who raised her died long before she was told, and was left by her family in abject circumstances. “There was no wake,” says a concerned neighbour (Ruth McCabe). “There was an inquest.”

Thus begins Vera’s own riveting inquest, one that will brutally dispel her fantasy of a supportive family, spill the ugly truth of her life as a New York call girl, and expose the hypocrisy of late 1990s Ireland together with its shameful secrets. Only when the town has been scandalised by her flagrant bacchanalia will the past be laid to rest.

A meticulously crafted play, acutely observed and fathoms deep, The Wake finds an exceptional director in Annabelle Comyn, someone in assured possession of its strange soul. Leaving her stage startlingly spare, Comyn spurs set designer Paul O’Mahony and lighting designer Sinead McKenna to create perhaps their best work, pushing the Abbey’s resources towards stunning new displays. (Honestly, Abbey, I never knew you could do that.) As Vera tries to find her place in this world, we begin with a vast backdrop of the cosmos, slowly stiffening into a monochrome map of Tuam, resolving, finally, with a hole in the ground. From the universe to the grave, this is performance and design as pure poetry.

That is also what Murphy’s brilliant play deserves: a production that is its equal, one that will match it for insight and daring. Comyn is unafraid of wry artifice and stage trickery: the more venal siblings of the O’Toole family (including Lorcan Cranitch’s bluff Tom and a miscast Kelly Campbell as the brazen Mary Jane) first emerge from alcoves, as though recently prised free from soulless portraits. That uncanny tone, suspended somewhere between reality and abstraction, allows O’Sullivan to give not just one brilliant performance, but two: as a woman split between such illusions and reality.

In an extraordinary moment of chaotic drunkeness, sex and violence, shared with her damaged childhood Romeo, Finbar (a terrifically well judged Brian Doherty), her duality is at once ferocious, frightening and vulnerable: a soft soul hardened by an unforgiving world.

Sealed together in her inheritance, an abandoned hotel, Vera’s love triangle – or pyramid – is completed by Frank McCusker’s supercilious brother-in-law, Henry, a stalled and sardonic solicitor. “I’ve never had such a nice few days,” beams Finbar sweetly of their misfit arrangement, which has shocked the decency of a thoroughly indecent town.

Murphy paints detailed characters and layered circumstance with a remarkably light brush: history, religion, property, institutional abuse, sexual desire, even hunger are all mercilessly shaping forces, but they never feel like a checklist of dysfunction. Instead, Comyn lets them charge the atmosphere: the Abbey has rarely felt so eerily cavernous, and her nerveless control of pace over these three hours makes all sense of time seem woozily distended: in all-night drinking sessions, and a shroud of haze. It’s as if this family, this country, had been dazed and suspended by material gain and social erosion.

They are delivered, eventually, through the movements of a wake that is as comic as it is sad, surreal and exquisitely familiar. You may leave similarly exhausted, but feeling lighter, at theatre so thrillingly alive to our stages of grief.