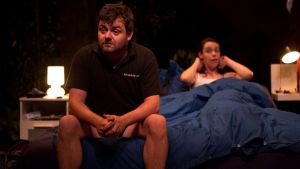 A good man commits a bad deed for a good reason then ends up paying what threatens to be the ultimate price. This is the top line of Franz Xaver Kroetz’s play, set in 1970s Germany, in which Kurt and Martha are a young couple on the brink of parenthood. Heavily pregnant and exhausted, Martha regularly works until late evening, making endless cold calls for a survey on banking practices. Kurt is a lorry driver, obsessed with providing for his family and desperate to do just about anything if there is lucrative overtime pay in it. These are the small forgotten people, struggling to keep their heads above water.

When they start totting up the price of buggies and bottle warmers, it becomes clear that their household budget is about to be stretched beyond bursting point. The universality of the original storyline and the fearless contextualising of Conor McPherson’s new translation are a stark reminder that there is nothing novel about a society contaminating itself from within.

Alyson Cummins’s design creates a modest domestic cocoon, topped with leafy greenery while in direct contact with the earth’s bedrock, whose damp tendrils are slowly seeping into the infrastructure of Kurt and Martha’s nest. PJ Harvey’s thickly layered score is packed with menace, imbuing Ian Rickson’s intense direction with a cinematic scope that sweeps up and dwarfs the characters’ wants and needs. This heady mix is seized upon by Caoilfhionn Dunne and Laurence Kinlan in the central roles. If ever there was a woman at odds with pregnancy it’s Dunne’s Martha, grimacing in discomfort, gnawing her fingers, shuffling inelegantly.

In contrast, Kinlan’s jaunty mask of puppyish energy betrays the inner terror of a man who knows he is about to go under. The analogy of drowning is inflated to almost unbearable extremes when Kurt unquestioningly does his boss’s bidding, in the process putting in jeopardy the things that are most precious to him. It’s not an easy watch but in its translation and transposition, Kroetz’s deceptively simple story has been turned into a Conor McPherson play.