The Arc: a team of dramatists undertake a mad experiment

The Arc saw 10 playwrights relay-write a new play during the Dublin Theatre Festival. The result is a glimpse into the furious energy of the theatre 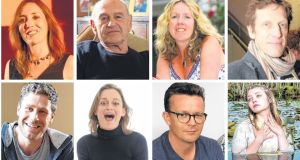 Late in September, not long before the Dublin Theatre Festival began, the festival approached The Irish Times to discuss a collaboration. The idea was simple, ambitious and close enough to madness to qualify for inclusion in the programme. Laurence Mackin, the Arts and Ticket editor of The Irish Times, invited 10 playwrights to contribute a scene each towards a short play, passing it on like a baton. The finished result would then receive a rehearsed reading by a professional director and cast at the end of the festival. The entire project would come together in three weeks, with most of the writing done in just two weeks, leaving two days to rehearse. How hard could it be?

Such improbable undertakings require a sense of propulsion, and the fuel reserves of the festival, when several productions are opening daily, can be surprisingly easy to siphon. Other things are counter-intuitive: the busier playwrights are, the more inclined they are to agree to a tall order with a 36-hour deadline (most of the playwrights had recently seen a new work staged), as though creative momentum was better to sustain. But the most crucial aspect was getting the ball rolling.

Tom Murphy, whose latest play, Brigit, was staged by Druid at the DTF with his earlier work Bailegangaire, was the first writer approached and the first to agree. Afterwards, the full complement come together quickly. Enda Walsh agreed immediately. Deirdre Kinahan, in the throes of bringing her play Spinning into production with Fishamble, absorbed it without breaking stride. Sonya Kelly, touring Brisbane with her new show How to Keep an Alien, took up the reins long-distance.

As the scenes were published online during the festival, The Arc (as the project had been christened) recruited Annabelle Comyn to direct the final reading, with Kate Stanley Brennan, Niamh McCann and Declan Conlon secured to play its three parts. In the meantime, Stacy Gregg, Kate Heffernan, Bush Moukarzel, Gary Keegan and Feidlim Cannon of Brokentalkers and Genevieve Hulme-Beaman continued to develop, expand and refine the shape of the play, with Michael West given the arduous task of concluding it.

As a name, The Arc suggests more polish than the project expected. Story arcs, with character development, reversals and denouements, give a play its shape, a construction that suggests consideration and unified vision. Speaking after the event, Michael West is more inclined to think of this accelerated relay as “a skit on theatre making and a spoof of the pressure that goes into a show”. There’s some truth in that, although the intention is more to create a miniature replica of the Trojan work involved in theatre.

“The idea was to try and do something very, very fast and really energise people’s approach to theatre,” says Laurence Mackin. “It was to think about how fast writing can work. And to have something at the end of the festival, when everyone is exhausted, that is mad and colourful.” In a way, this fusion of inspiration and deadline is where theatre and journalism might meet halfway. So what is the result?

The experience of reading La Reine Claude, as Murphy decided to call the play, and watching it are tellingly different. Where the published extracts bear their authors’ names, priming a reader to notice individual style, the performance is a continuous event: Comyn and her cast decide to work from one script without demarcation, thinking in terms of coherence rather than chapters.

Beginning as a sketch of two Polish women – a maid, Karolina, and her sister Paulina – awaiting the return of her employer, an Irish businessman called Mulcahy, Murphy’s proposition is towards a revenge plot and an arts-market satire. The apartment is dominated by a trompe l’oeil, Mulcahy sports a “cliched pencil-line moustache to say something about him is dodgy” and totes a newly acquired Percy French watercolour. The scene ends on a cliffhanger: “You have something that belongs to me.” And then it explodes.

Enda Walsh doesn’t so much continue the play as restart it, replaying the scene in ludic caricatures. Now everything smashes apart: teacups, wine bottles, the kitchen, the play’s form. Mulcahy “sports a Hitler moustache” and reveals a new Percy French record (“He represents an Ireland I think we’d all like to return to”). As Murphy might have anticipated, it may have been too early for logic.

Deirdre Kinahan, again restarting, adds vengeful and surreal embellishments: “You stole my mother’s voice.” Sonya Kelly opens up a comic meditation on form (“I don’t like this genre”) and digresses into a postdramatic lecture on realism: “The goal of extreme realism is to capture a moment in paint.” As Stacy Gregg seeks an earthier purchase (she even has one character leave teeth marks on a bannister) and Kate Heffernan lets the women toy with Mulcahy (and pop-culture references), Bush Moukarzel folds the play back on itself, introducing Tom Murphy as an offstage character – an acquaintance of Mulcahy’s – while invoking the audience and ruminating darkly on artists and exploitation. Brokentalkers takes the idea further, making art an act of violence (“The goal of extreme realism is to capture a moment in pain”) and ending with an eye-gouging. Genevieve Hulme-Beaman, writing mainly with stage directions, constructs a macabre torture scene, and Michael West, performing word associations like a series of backflips, somehow combs through every symbol of the assembled text – trompe l’oeil, the Polish language, eye-gouging, plumbs, art market – to find a witty way home. Mulcahy himself, drugged and mutilated, becomes an art work. It is tempting to consider West’s labyrinthine contribution its own spoof of the process.

About a week before the reading was to be staged, The Irish Times received an inquiry from an organisation in London that was interested in staging the play. “They obviously haven’t read the script,” is Laurence Mackin’s reply. The point, ultimately, is about process: a journey rather than a destination. Writers come together in equal parts co-operation and competition, readers get to discover the play as it develops, and the arc of La Reine Claude only becomes apparent at the end. It is a scale miniature of an industry during festival time, “to lift the curtain for a glimpse of the furious energy that goes on backstage”.

It is also an attempt to let theatre and journalism understand each other a little better; to share a collegiate sense of amazement, as Michael West puts it, “that people do this kind of thing at all”.

The full script of La Reine Claude is available on irishtimes.com