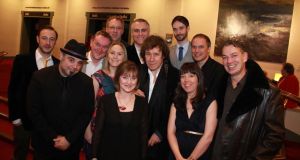 Cusack would later introduce Rea, the recipient of this year’s Special Tribute Award for his contributions to Irish theatre, to a crowd of 800 at the National Concert Hall. The awards celebrated the best of professional theatre in 2014.

“I suppose it’s the extraordinary collaboration between him and Brian Friel with the Field Day Theatre Company that is something that we should really pay huge tribute to because it was an amazing achievement of creative collaboration,” said Cusack, who was Rea’s classmate at the Abbey Theatre School.

Also speaking before the ceremony, Rea, who was nominated for an Academy Award for his performance in the 1992 film The Crying Game, said he was nervous about the honour.

“You kind of scroll back through your life and wonder what you’ve done that allows them to, without embarrassment, offer you this thing. Really, it all comes down to [the writers]. I sort of feel it has nothing to do with me,” said Rea, who is due in Lithuania on Wednesday to film scenes for the BBC’s War and Peace.

“If you do start to wallow in some sense of being successful, then you’re dead. It’s over.”

Actor and comedian Sonya Kelly and actor Shane O’Reilly had the job of announcing the winners across 15 categories.

Cusack herself won the Best Actress award for her role as Margaret in Our Few and Evil Days by Mark O’Rowe at the Abbey. The production itself won Best New Play of 2014. She said the play was “a dream. It was also, arguably, the most difficult text I’ve ever had to attempt.” Of Irish theatre, she said: “It’s amazing, for such a small island, what we’ve managed to produce.”

The award for Best Actor went to Lewis J Stadlen, who played Solomon in The Price by Arthur Miller, which was directed by Doug Hughes at the Gate.

Irish Times deputy editor Denis Staunton said: “Last year was the sixth year in succession when State funding for the theatre was cut, so it’s something of an achievement that there’s any theatre left in the country at all. In fact there’s a great deal going on and much of it is excellent and exciting.”

The awards ceremony will be featured on The Works on RTÉ One at 8.30pm on Friday, February 27th.

Judges’ Special Award: Limerick City of Culture: An award to its former programmers and the current administration  for rebranding the city as a beacon of artistic endeavour.

Best Actress: Sinéad Cusack as Margaret in Our Few and Evil Days, written and directed by Mark O’Rowe for the Abbey Theatre.

Best Actor: Lewis J Stadlen as Solomon in The Price, written by Arthur Miller, directed by Doug Hughes for the Gate Theatre.

Best Supporting Actor: Simon O’Gorman as Thomasheen Seán Rua in Sive, by John B Keane, for the Abbey Theatre.

Best Costume Design: Mike Britton for How Many Miles to Babylon, by Jennifer Johnston, adapted for stage by Alan Stanford for the Lyric Theatre.

Best Lighting: Ciaran Bagnall for Pentecost, by Stewart Parker, for the Lyric Theatre.

Best New Play: Our Few and Evil Days by Mark O’Rowe for the Abbey Theatre.