The pioneering theatre company is taking an aggressive approach to Chekhov’s sprawling, untitled play and has even introduced a live director’s commentary – can it be tamed? 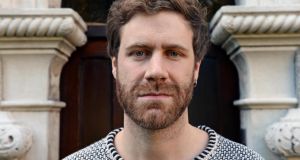 Bush Moukarzel: ‘The experience is supposed to feel as complicated and layered as it feels like to have a mind. That’s the mess.’ Photograph: Eric Luke

It’s hard to find anybody with a good word to say about Platonov. That’s as true of the dissolute character at the centre of Anton Chekhov’s first play as it is for the work itself (which is actually untitled, but often goes by the character’s name).

The protagonist is a disillusioned schoolmaster, one of 19th-century Russia’s “superfluous men”, whom one character sums up as “a superb example of modern vagueness”. This, he says, is the epitome of post-emancipation Russian society, too baffling for any artist to make proper sense of: “It’s one great chaotic mess.”

He may as well be critiquing the play, which Chekhov began as an 18-year-old in 1878 but abandoned three years later. An unaltered version would take five hours to accommodate its 20 characters, 83 scenes and melodramatic stew of seductions (four women compete for the feckless Platonov’s affections), various suicide attempts (one on a railway track, one swallowing matches, one with a pistol) and a climax of alcohol-fuelled hallucinations and hysteria. Many adaptations exist, but the original text is widely considered unstageable. Writer, director and performer Bush Moukarzel seems to like those odds.

“It gives you such licence,” he says of the inspiration for his new show, Chekhov’s First Play, an invigorating, cerebral and unsettling hour-long riff on the play, Chekhov, the theatre, life, death and pretty much everything else. “You can have joyous fun with something that’s unfinished, unstageable, unknown. It invites that quite idiosyncratic approach. Hopefully the audience is onside because they have fewer preconceptions.”

In a bright dance studio in Trinity College Dublin last week, rehearsals had reached an advanced stage. The space was strewn with classically Chekhovian details: a samovar squatting on a long banquet table, actors struggling with the corsetry of Belle Époque costumes and, of course, an idle pistol, a mischievous reference to the dramatic principle of “Chekhov’s Gun”.

However, elsewhere modern devices lined the space: a rack of headphones, an eerie binaural microphone. “Okay, everyone,” says Ben Kidd, the production’s co-director. “Let’s mic up and do a run.”

The cast adjust discreet microphone headsets while the crew put on headphones and Moukarzel introduces the show in a conspiratorial whisper.

“You’re probably wondering why you’re all in headphones,” he begins. “The play is very complicated and messy, so I thought it’d be good to have a director’s commentary so I could explain what’s going on.”

So begins Dead Centre’s latest production, archly presenting itself as an attempt to prune and parse the “great chaotic mess” of Chekhov’s earliest ambitions, but whose real mission is still more adventurous: to collapse life into art through the gradual derailing of a performance.

That may not surprise audiences familiar with the company’s work so far, which has routinely taken the idea of unstageability as a challenge. Debuting in 2012 with Souvenir, Moukarzel’s one-man performance inspired by Marcel Proust’s seven-volume À la recherche du temps perdu, the company gave heady material a remarkably spry staging.

That continued with 2013’s Lippy, which began with a post-show discussion for an imagined play, then worked into more disturbing matters, piecing together the suicide pact of four women in Leixlip in surreal imagery. Lippy has since taken the company around the world, and its success has enabled this multilayered and metatheatrical approach to Chekhov.

The director’s commentary, which Moukarzel provides during the performance via the audience’s headphones, begins like the pompous marginalia of a professional who distrusts the material (“It’s not a good play, but it’s hugely ambitious”), the actors (“He’s ruining it”) and the audience (“You’re probably missing the key themes”). But such carping and despair is also uniquely Chekovian: much of the director’s commentary has been artfully adapted from Chekhov’s letters, which often snipe and seethe with the passion of a young artist. Life is folded into art.

“Everyone knows what it is to be Chekhovian,” says Kidd, who considers those expectations inhibiting. “It’s not that the estate won’t let you do something. It’s a less obvious enemy. It’s self-policing.”

Moukarzel says: “People locate it in mood or tone. Some people locate it in a drawingroom, what the set looks like. Other people think, ‘Oh how sad they are’. ‘Oh, it’s autumnal’. And the point is, on closer inspection, this all falls to pieces.”

It’s a fair observation: even Chekhov’s most accomplished works are decidedly odd. His most moving tragedies are dotted with absurdity and deliberately labelled as comedies, but few saw them that way.

“Here’s a flight of fancy now,” says Moukarzel. “You can have ideas about what human beings are too, and on closer inspection, that falls to pieces. People behave in the weirdest ways.”

The mess of the world

That may go some distance to reconciling Chekhov’s famed idea of naturalism with the mess of the everyday world. “Let everything on stage be just as complicated, and at the same time just as simple, as it is in life,” he once said.

Moukarzel has a corresponding ability to distil the ineffably complicated into something much more fleet and comprehensible. Early last year he tweeted a picture of some of his research materials for Chekhov’s First Play, a stack of 21 books, ranging from biographies, collected works and adaptations to less obvious titles, such as Kenneth Goldsmith’s Uncreative Writing, Geoffrey Ingham’s The Nature of Money and Bruce Eisner’s Ecstasy: The MDMA Story. In conversation, he refers to “Chekhovian maximalism”, but one suspects it fits with his own sensibilities.

Moukarzel compares the real-life mirror of Chekhov’s work to a fata morgana, an enticing mirage: “It draws you in. You think, Oh, yeah, that looks like the world. But it’s totally artificial and constructed. It’s very tempting to believe it’s the pinnacle of the one-to-one representation [of real life] in art, but on any closer inspection it’s just heightened craftsmanship and a heightened artificiality.”

Dead Centre seems to have a similar preoccupation with enveloping folds of text: the performance text, the subtext, the context are each laid bare in their performances. (“What are we missing?” Kidd asks Moukarzel, when I mention it. Moukarzel thinks a moment. “Teletext?”)

When Souvenir ended with a View-Master slideshow encouraging us to remember the show as something better than it was, or Lippy included its own fabrication of interval responses, it felt as though the ideal Dead Centre production would somehow include the totality of the theatrical experience, from performance to reception, a kind of “Moukarzellian maximalism”.

“I don’t think that’s just to do with postmodernism or metatheatricality,” says Moukarzel. “To me it’s just very close to how the mind works. The mind is meta. It loops around. So it’s got nothing to do with the banality of stating that we’re in a theatre. Our minds are four steps ahead of ourselves. You go obsessively to the end, and try and finish every thought you can have to honour how smart the people in the room are.

“The goal of doing all that is feeling. It sounds intellectual, maybe, but the experience is supposed to feel as complicated and layered as it feels like to have a mind. That’s the mess.”

To a great extent that’s Platonov, too: profligate and ungovernable as a play, chaotic and unpredictable as a man. The secret of Dead Centre’s daring new production, and its startling collapse of life into art, is that Platonov could be any one of us.