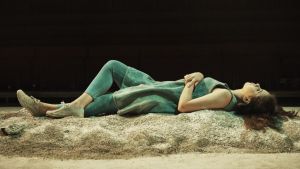 This new play about unity and division in a time of violent upheaval lands with a shuddering sense of timeliness. With more than 50 million people now forcibly displaced by conflict or disaster, the human face of this calamity can become blurred by statistics or fractured into images of mass migration and defended borders, overloaded boats in the Mediterranean and hand-wringing European officials.

Carmel Winters, commissioned by the Abbey Theatre to write a new play for NAYD’s National Youth Theatre, concentrates less on a specific time or place – we are in a village somewhere in the Middle East – than on the effect of exile on a community and its struggle to survive. “They called our valley a lost paradise,” announces a narrator, Lubabah (Éabha Landers). “But we who lived there all our lives, we simply called it home.”

When “the current situation” escalates into a full-blown civil war, the villagers flee into the snowy mountains; an alliance of farmers, hunters, soldiers and intellectuals made more fragile by scarcity and duress. It is, in some ways, a sudden leveller: values and social hierarchy are abruptly redefined; thieves become guardians. Yet nothing is forgotten; the same prejudices rebuild themselves in exile and the group remains in a perpetual tension between banding together and falling apart.

Division and distrust are hard-coded into the production, from director Jo Mangan’s traverse staging, which cleaves the audience in two, to Liam Doona’s set, a wooden platform that curls into a half-pipe ramp. In her depictions of totalitarian regimes and brutal censorship, Winters nods towards her political theatre forebears. The dialogue, shorn of colloquialism, can recall Brecht and Pinter, while acidulous depictions of a cynical governing “Committee” stamping down the efforts of Naseem (Peter O’Connell Stack) to write his people’s story, have a Kafkaesque bite that Mangan gives a Gogolesque giddiness.

For all the despair and disintegration – in which Clarabelle Murphy’s Nimaat stands out, pressured to kill her beloved goat by a starving group – the production is marked by the collaborative bonds of its ensemble. Nothing demonstrates that more clearly than moments of music, performed live by the cast. While Roger Gregg’s upbeat compositions contain little of the discord of Winters’ text, which is at pains to avoid glib resolution or harmony, they become a model of co-operation and even resilience. “From the valley to the mountain/ From the cradle to the grave,” they sing, neither saved nor crushed, “We’re all the one together/ We’re heading the same way.”

‘Do I really care?’ Woody Allen comes out fighting
10