Roddy Doyle does Mozart: ‘I’m a recent convert to opera’ 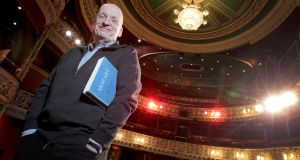 Had you asked Roddy Doyle 10 years ago how many operas he had been to, he says, he would have been able to tell you easily: “It was one.”

Pose the same question today and it’s so many that he doesn’t have an answer, he says wryly.

“I am what you would call a recent convert. The more I went the more I got to love the whole experience of watching it. But I never imagined that I would be involved myself, until I was invited to work on Don Giovanni.”

Music has always been an essential part of Doyle’s work. There was the musical backdrop to his first novel, The Commitments, about a working-class soul band in 1980s Dublin, which he recently adapted as a stage musical that will have its Irish premiere in October.

Then there was his 2004 novel, Oh, Play That Thing, which was set against the backdrop of Prohibition and the emergence of jazz in the speakeasies of Chicago. But music has always been an integral part of his writing process, too.

“I always listen to music while I write, not necessarily music that has any relevance – and it is rarely music as research – but I often think that A Star Called Henry would have taken a good deal longer to write if I hadn’t been listening to Philip Glass while I was writing it.

“I would stick him on at three o’clock, and it would give me a great burst of vitality that would keep me working up until six.

“I suppose I like to think, when I am going upstairs to my office in the attic, that I’m not just going up to work but to listen to music.”

Working on Mozart’s opera, however, involved listening to music in an entirely different way, and writing in a mode that he had not encountered in his 30 years as a professional writer.

‘They just lifted text from the book’

In 2001 he was approached by a Belgian composer, Kris Defoort, and director, Guy Cassiers, to write the libretto for an operatic version of his 1996 novel, The Woman Who Walked into Doors.

At the time, Doyle says, “I didn’t feel in a position to do something like that, mostly out of ignorance, but my family were also quite young at the time, and I didn’t fancy spending time away from them.”

But when he went to see the opera, when it opened in Antwerp, he was astonished to see that he was credited as the librettist.

“They just lifted chunks of text from the book and set it to music. So technically, yes, the libretto was mine, though I didn’t make any contribution to the process.”

Translating Don Giovanni, however, was an entirely different prospect.

“I was familiar with the opera. Well, I had seen it once, and sort of knew the story of Don Juan in a vague kind of way. But it was the fact that I didn’t really know what I was doing that attracted me.

“The adventure of it. I find I am bit more open to those sort of challenges, to new things, as I get older.

“I listened to the score a few times and realised I didn’t really know it at all, and when I said yes I wasn’t thinking, Why did they ask me to do it? I was thinking, Right, what can I do with this? What can I do to make this fresh? How can I put my own layer of difference on it?”

Translating the story, Doyle says, came easily. The opera is based on the legend of the fictional libertine Don Juan, who has appeared in various forms throughout literature since the 1600s.

Mozart’s version was shaped around a libretto by Lorenzo Da Ponte, who forced the amoral womaniser, renamed Don Giovanni in the Italian translation, to face his demons in the final aria.

“When I read it I wasn’t thinking, Let’s have people running around with mobile phones, but I thought, Yeah, that could work in Dublin today. The story itself is kind of timeless. That’s why it has been told so many times.

“I mean, if Don Giovanni isn’t a cavalier, which he can’t be in a contemporary version, the story doesn’t fall away.

“If Leporello, the servant, isn’t exactly a servant in a strict sense in my version, the relationship can still be very similar to that of a master and a servant. And there was nothing about the women that needed much reworking.

“So it was easy enough to imagine it in present-day Dublin.”

Doyle has adapted or translated work as various as Synge’s The Playboy of the Western World and Gogol’s The Government Inspector for the Abbey Theatre in recent years.

He enjoys the workmanship involved. Indeed, he says, the idea of adapting an existing story is a huge attraction.

Compared with “making up everything from scratch it is quite relaxing”, particularly when it comes to finishing a work.

“The most difficult part of [writing] for me has always been bringing a story to an end. But when I know the end is already there, that I don’t have to do anything except find a way to tell it, I am a lot less anxious.”

The craftsmanship involved in writing a libretto presented other challenges. Doyle says he worked from two very different translations, and “it was line-by-line work.

“I had a rhyming dictionary for the first time in my life. It was syllable-for-syllable stuff, and I have never written poetry.

“You just don’t have those sort of conditions when you are writing prose. You can always add an extra sentence or paragraph if you want or need to. In terms of storytelling there is a lot more freedom to prose.”

“It wasn’t just about rhyming. There was also the type of words you could use. With opera you often want a sound at the end of a line that will allow a singer to keep their mouth open, but, in English, words often end quite crisply.”

He found the formal restrictions exciting rather than frustrating. “You almost always had a choice, at least, about what word you might use, so it was a case often of choosing the right one, and then you feel it’s not a slavish thing, because that choice of word might nudge the story in one direction or another.”

With six months to go until the production has its premiere, Doyle has just signed off on the libretto.

The script and score have already been sent to the cast, who will “have it all learnt before they even start rehearsals”, Doyle says incredulously.

“What I am used to, from the theatre, is the cast learning their lines in the first weeks of rehearsal.”

There have been a few changes over the last few days, in collaboration with the conductor Fergus Sheil, “where we found there was one syllable too many or one syllable too few or the wrong word for the rhythm”.

But Doyle’s work is mostly done. “It’s not my job to worry about staging, so in rehearsals I don’t think I have any role.”

He will just have to show up on opening night and sit back and enjoy. “Though I might have to buy a new suit.”