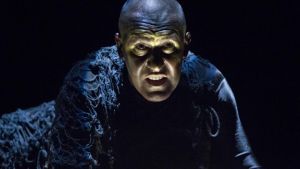 She speaks to us from within the grave and beyond; an otherworldly figure, painted gold, but now blackened with shadow and soot. She looks like an Oscar statuette rescued from a house fire. This is Pat Kinevane’s newest creation, a woman unnamed and all but unloved. In life, she was disfigured by a lightning bolt. In death, she seems to give off new crackles of electricity.

The stage for Kinevane’s solo performance, his third for director Jim Culleton and Fishamble, is a modest indication of ancient opulence. A shimmering strip of gold curtain stretches from the floor towards the cosmos. Elsewhere is a golden crown, a golden glove and even a half-knitted golden fleece, as though the Argonauts were expected round at any moment.

But Underneath is set somewhere else, between this final resting place in Cobh, Co Cork and ancient Egypt. “This is definitely the haughty part,” she says of her tomb, as engaging as a gossipy neighbour. She is understandably grave-proud.

Only Kinevane would combine the earthy and the ethereal like this, recognising that Ireland and ancient Egypt still observe social status in death. It’s a brilliant conceit, making just enough sense and bewilderment to captivate, and elsewhere Kinevane is guided by the dramaturgy of “just because”.

Why, periodically, does the show switch to voiceover and movement sequences devised with Emma O’Kane as though following hieroglyphics? Just because. Why is the speaker’s story of bullying, small kindnesses, self-respect, betrayal and fixation on beauty intercut with sequences parodying the TV show A Place in the Sun? Just because. And why does this play, which might have been Kinevane’s masterpiece and still could be, lose its way?

Just because Kinevane has too close an identification with his character, you suspect. In the peerless Forgotten and the sly Silent, Kinevane treated elderly, homeless and mentally troubled characters with great compassion but zero sentimentality. Here he gives her every little victory: a put-down for a cruel teacher, a counter-humiliation for a cruel hotel customer, even a final revenge from the afterlife for her longest tormentor. It’s comforting fantasy, but it doesn’t seem genuine.

There are other problems, which are just as fixable. Still see-sawing between traumatic tales and leavening gags in the third act, the pace judders and drags. Kinevane’s striking performance, not to mention Denis Clohessy’s excellent sound design, really deserves the consideration of a lighting designer (none is credited).

Kinevane has given his character a vitality beyond death, a wicked sense of humour, the intimate confidence of an audience, even – in the form of hookers in the flat above – two guardian angels (one plays the harp). He is close to giving her the one thing that most eluded her in life: a truly heart-breaking beauty. At the West Cork Fit-up Festival from March 3rd-8th and nationally through to early July