James Joyce’s story gets a sonorous treatment, but can anything be more musical than his prose? 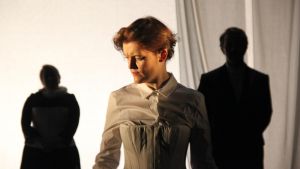 Everything happens just beneath the surface of James Joyce’s masterful short story The Dead. Arriving to the Christmas party of his elderly aunts, Gabriel attempts light-hearted banter with a maid, but stumbles and beats an awkward retreat. He sulks when teased, broods over memories, burns under accusations, frets over delivering a speech, and overlooks his wife until, finally, her inner life eclipses his own. For all the surrounding bustle of the story, nothing much occurs, yet everything is forever changed within.

Composed by Ellen Cranitch with libretto by Tom Swift, this handsome chamber opera adaptation from Performance Corporation and Breda Cashe sweetly honours the dead – its absent figures and lives half-lived – but conjuring up Joyce’s distracting scenes of life is more of a challenge. With a string quartet and a versatile cast of four singers, occasionally trading characters between them, it is a fleet and sparing production, which Niamh Lunny and Kevin McFadden’s monochrome design makes more austere.

That is close to the tone of Cranitch’s music; stately, spacious and largely forlorn. It tiptoes through encounters in nimble pizzicato, or slides up under sombre realisations in keening notes, which Cranitch conducts seated at a long slanted dinner table. Swift’s valiant work to distil Joyce’s prose into short revealing lyrical cycles comes at similar angles, expanding or telescoping time. A brief remark in the novel becomes a flurry of apprehension: the excellent Ruth McGill and Clare Barrett as the elderly Morkans singing “Any sign?” amid a chorus of worried gasps as they await the coming of their nephew.

Like McFadden’s lights, which project a pattern of windows on the floor, the style is to indicate rather than elaborate. For director Jo Mangan, this means that characters can be fleetly summoned and easily swapped. A maid’s headdress and a thick Dublin accent unfussily announce Lilly, passed between the exquisitely voiced Lisa Lambe (who plays a reproachful Gretta) and McGill (also amusing as strident nationalist Molly Ivers), while the protean Barrett dons a porkpie hat and a slur for the perpetually “screwed” Freddy, and spins out of them to play his moithered mother: a family drama in a single person.

Mangan makes room for playfulness, where a shiver of strings rises up under the aunts’ momentary horror, Rory Musgrave’s assured Gabriel makes his petulant protest (“I am sick of my own country. Sick of it!”) in rumbling bass baritone, or when a banquet is served up entirely in jelly mounds. The story’s effect, though, is something more bittersweet.

In Joyce, it is music that prompts the magnificently subdued denouement, an overheard song beckoning a shattering memory. Here The Lass of Aughrim is delivered precisely by McGill in haunting a capella, but it still falls to Joyce’s prose to describe its effect, of a soul swooning slowly, the snow falling faintly - as though, for all the production’s considerations, nothing could be more musical.

Out of the wasteland: the first World War and modernism
6

If Michael Collins had not been killed: an alternative history of Ireland
9