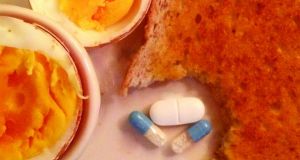 A daughter cares for her ageing mother in a scruffy house in Roisin Coyle’s Sick, with little respite. Deirdre Monaghan is astounding as Ruth, whose paranoia, obstinance, confusion, and occasional flashes of manipulation, are articulated in an utterly believable manner as her deterioration is met with increasing desperation from her daughter, Orla (Áine Ní Laoghaire). Sick, like illness and caring itself, is intensely repetitive: the announcements about making tea; the visits from the public health nurse (played with well-judged authoritative tenderness by Jennifer O’Dea); the frustrated outbursts from mother and daughter alike. The tedium, claustrophobia, isolation and lapses in empathy are very real, yet create an arc that is ultimately quite linear in its realisation, but that will speak very sharply to anyone familiar with this difficult and depressing subject.

My dad the spy: Stewart Copeland on his father’s secret life as a CIA agent
9

Harlots? It’s all pumping buttocks from the men. Which is fair enough
10